In a classic illustration statement of the dilemma of grasping that elusive entity called “public opinion,” Walter Lippman relates the story of a story of a group of Europeans residing on a remote island while World War One had broken out. These erstwhile castaways, drawn from most of the nations of Europe, went on with their daily existence, only realizing when the semi annual supply boat arrived that they had been sworn enemies for the last six months.

Lippman uses this story to illustrate the diffuse nature of public “opinion” that is based, he argues, on “pictures in our heads” that are drawn from the mediated information we obtain from the press, from television, from our friends and neighbors, and from political leaders.

How then is public opinion formed about election reform? Certainly after the 2000 election, election reform seemed to be a matter of public priority. But does the public care much now? Is election reform, like Heather Gerken describes it in The Democracy Index, a bridge collapse that is quickly fading from our memory, an infrastracture disaster waiting to happen at the next close election?

James Hicks and I included a series of items about elections and election reform in the 2008 Cooperative Congressional Election Study. While we didn’t plan it this way, we ended up asking a series of items that we’d describe in hindsight as “valence” items–survey items that capture fundamental American values about elections that few Americans would disagree with. Kind of like the apple pie of American election reform.

These items are displayed in the left hand column of the attached table. We provided survey respondents with a series of goals or values that we said might describe American elections, and we asked them how important that goal or value ws to the respondent. 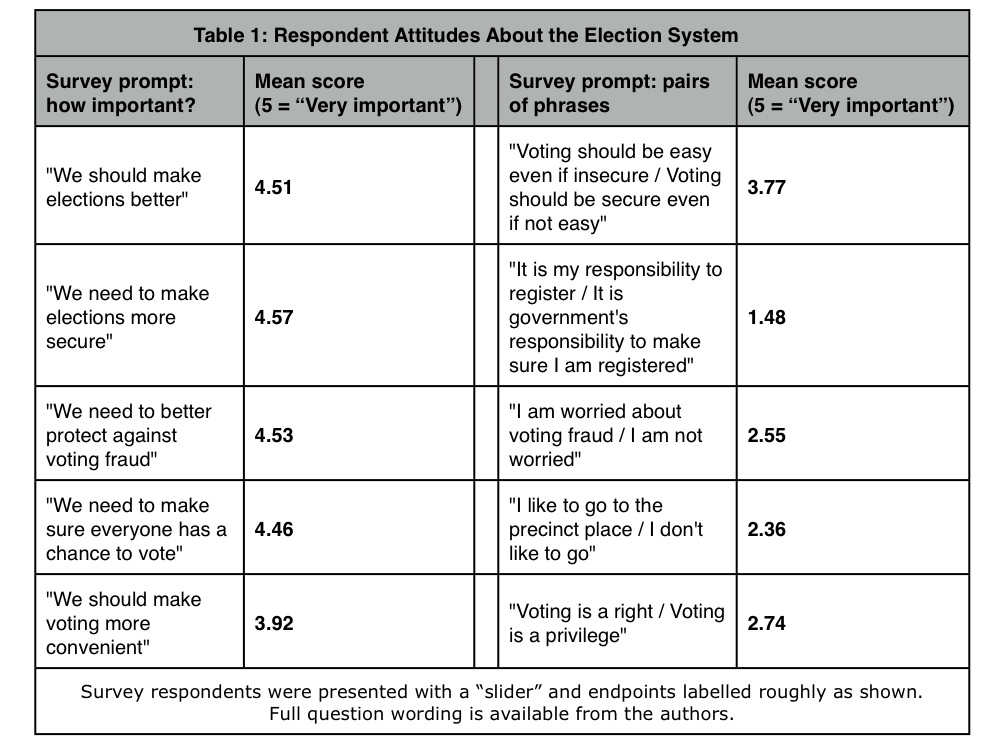 As you can see, most respondents agreed that “making elections better,” “making elections more secure,” “protecting against fraud,” and “assuring everyone has a chance to vote” were all equally important. The only matter on which we got any level of disagreement was whether voting should be “made more convenient.”

Of course, policy reform is always a choice of costs and benefits, as Spencer Overton so effectively points out in Stealing Democracy. In a second series of items, we forced respondents to choose between what we conceptualized as competing values: security vs. access, individual responsibility for registration vs. government responsibility; worry about fraud; and voting as a right or a privilege.

The results here indicate that election reformers still have quite a ways to go if they are going to marshal public opinion in support of election reform. More respondents valued security over ease of access (first item); individual responsibility for voter registration over government action (second item); and they were evenly split over worries about fraud and voting as a “right” vs. as a “privilege.”

Now keep in mind that this same survey indicates that the public is highly skeptical about election administration. Nearly 53% believe that “many” or “some” illegal immigrants are voting in elections. An overwhelming number (84% or 91% depending on how the question was worded) support a requirement of photo ID at the polls. And only 36% think that state elections officials would be fair in the case of an election dispute.

These numbers may be dismissed as uninformed by some, but should be disturbing for anyone who conducts elections in the United States. Americans are almost routinely dismissing elections administrators as partisan, unfair, and think that American elections are replete with fraud and illegal voting.

I don’t think that this story is all negative, however. There are paths to resuscitating public perceptions of American elections. These include: