I have been reporting on the turnout figures for two controversial tax measures in Oregon here, and I thought electionupdate readers may want to see the charts.

There does seem to be a trend in Oregon toward voters holding their ballots later and later, but as I’ve shown in a paper published in the William and Mary Bill of Rights Journal, there are also campaign effects.  In the January 2003 election plotted below, for instance, we found that Republican identifiers cast ballots earlier than Democrats. 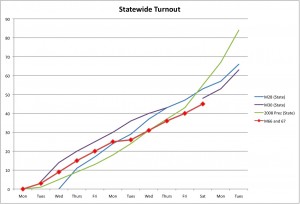 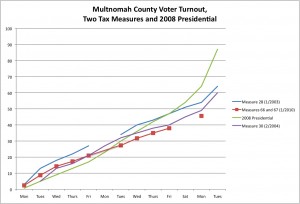