I subscribe to a lot of listserv’s full of nerdy statistical types, and a recent distraction for us is Google Correlate, which lets you enter a search term and returns other search terms that correlate with your term.  (You can even make drawings here and see what search phrase correlates with your drawing.  I wonder what programmer figured that one out!)

This got me thinking about Google trends and what it might tell us about early and absentee voting.  I did a quick search on “absentee ballots”, limiting the domain to the United States, and it returned this: 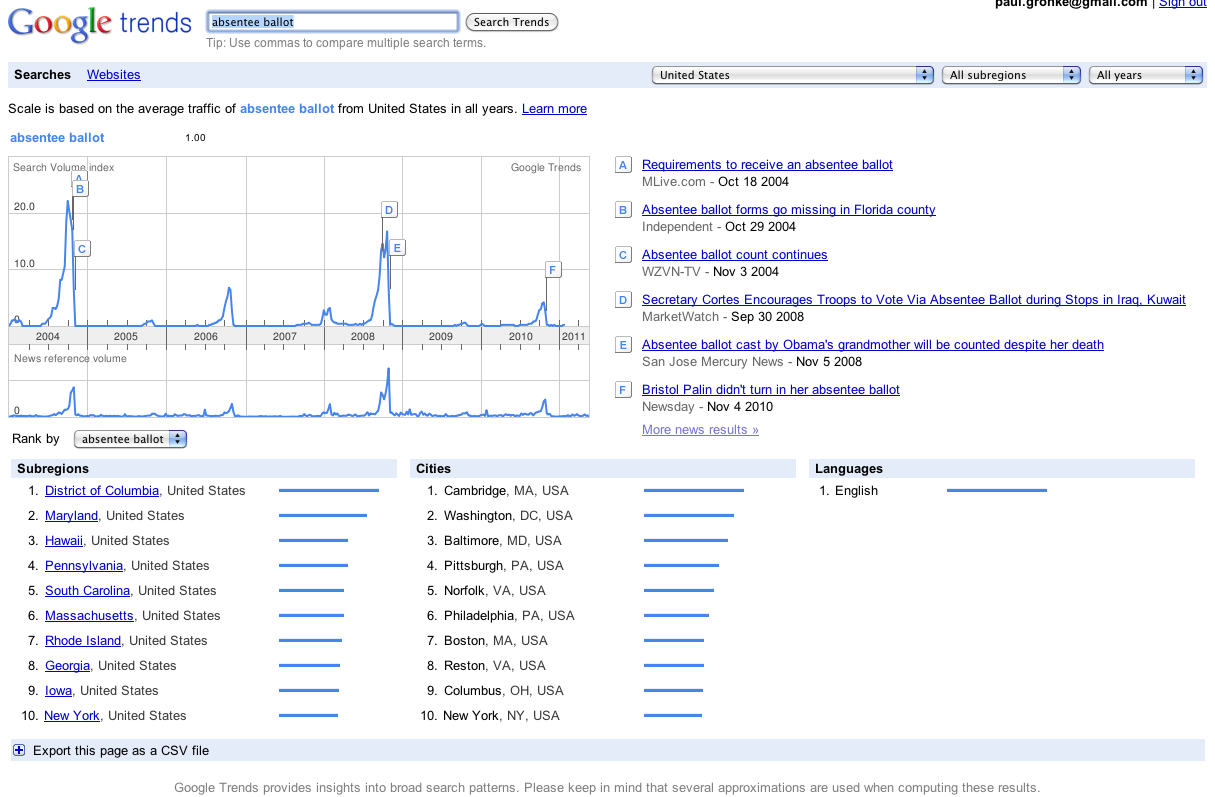 If you expand the image, you’ll see a fairly natural pattern, peaks in searches starting about three months before the presidential election, with smaller peaks before midterms.  Interestingly, the highest search volume occurred in DC and Maryland–but upon reflection, not surprising at all.  The District is a unique location, with so many of its daily workers residing in a different state.  (I presume the Maryland searches are DC workers.)

We can confirm this in the next search, which expands out the Maryland trend line.  You can also see the impact of the legal change which allowed no-excuse absentee in the state: 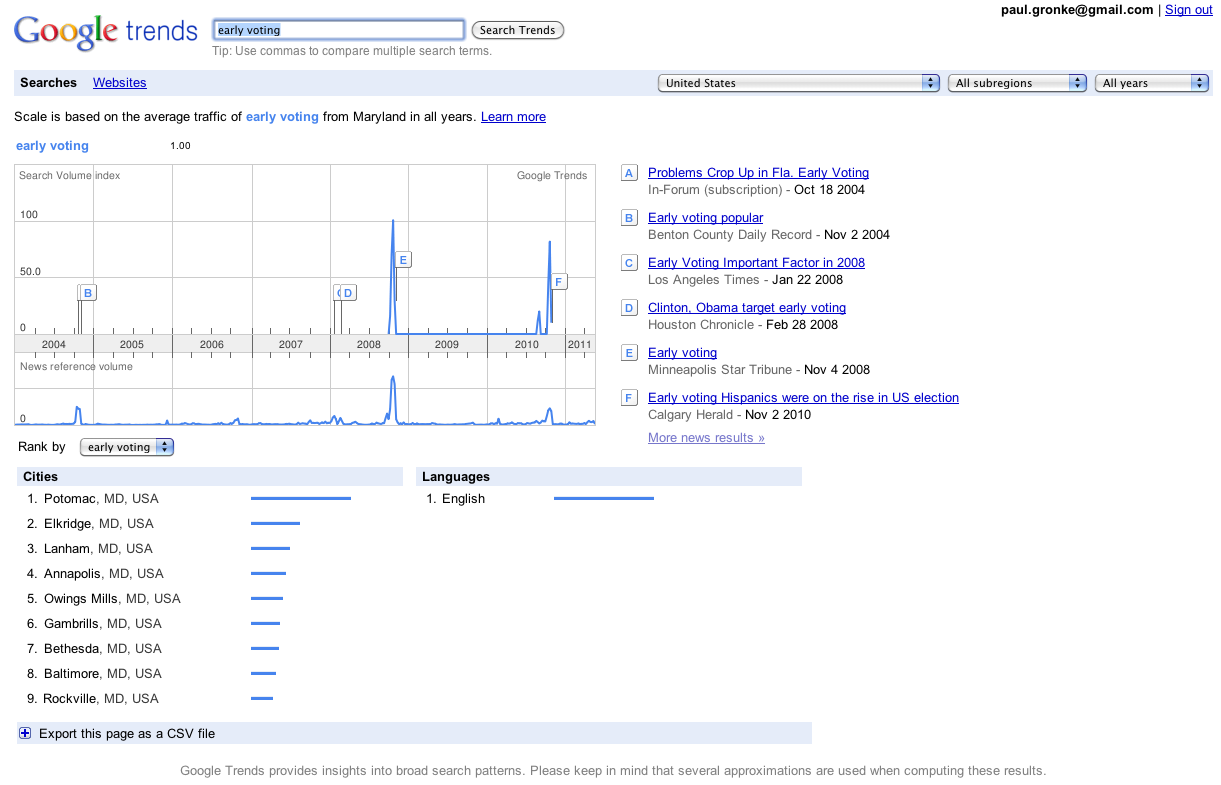 Looks like the largest number of searches come from College Park, home of the University of Maryland, followed by a series of DC suburbs–but not too close in.  Perhaps those living closest to the District are less likely to need an absentee ballot, while those farther out (Potomac, Lanham) may have a greater need.

Finally, let’s turn to “early voting.”  Here, the pattern looks a lot like absentee ballots, yet is distinctive in ways that reflect the changing popularity of in-person early voting.  There are notable peaks in 2004 and 2006, but a tremendous spike in 2008.  The subregions reflect places where early voting is most popular (and that are populous, since this is the total volume of searches)–Texas, Tennessee, North Carolina, Georgia, and New Mexico.  I’m not quite sure what to make of the high level of queries coming out of Arkansas and Mississippi, however. 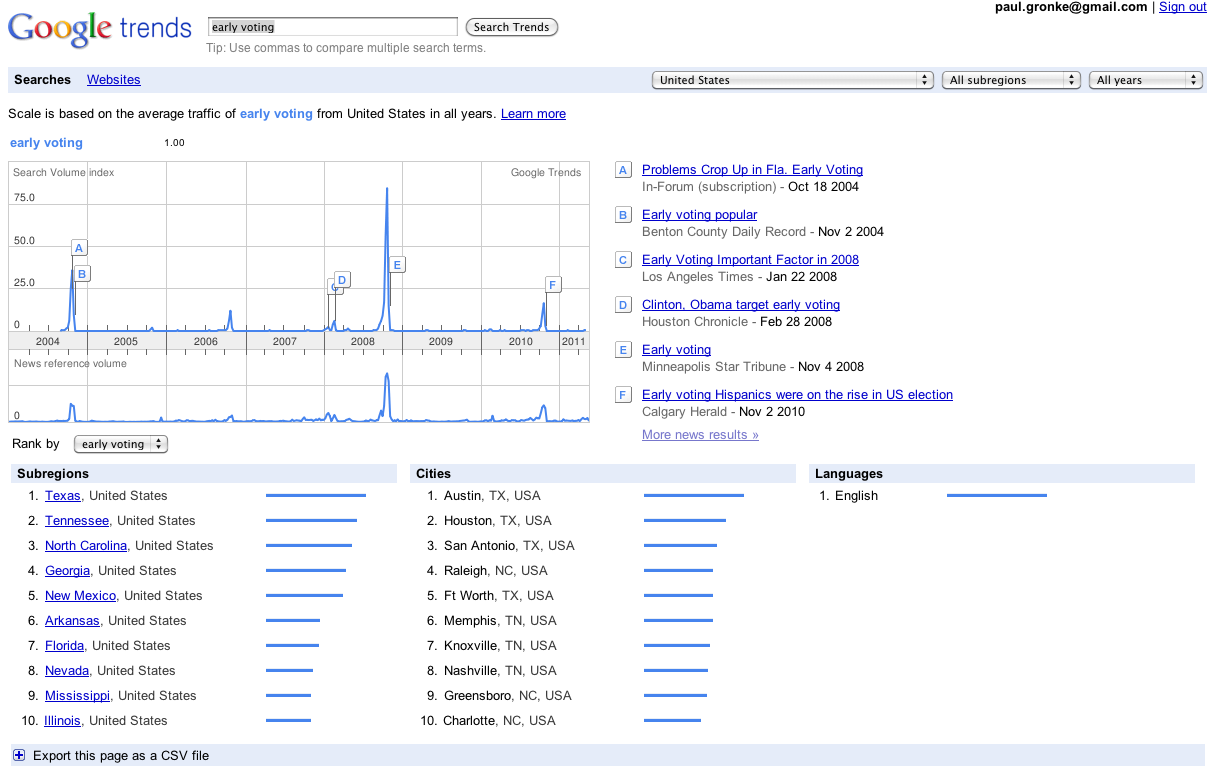