I’ve started taking a look at some survey research I did this past election into attitudes about voting technology, for a book chapter I’m writing with my graduate student, James Dunham. Something I hear a lot is that young people expect to do everything online. One implication of this (supposedly) is that one day, we will all be voting electronically, whether we like it or not.

Here’s a little peak at those attitudes. First, I estimated the probability that a respondent would answer the question, “Which type of voting method would you prefer to use?” with the response “an electronic voting machine with a touch screen.” Here is a graph of the estimated probabilities, as a function of age, broken down into respondents who voted on a DRE, compared to everyone else: 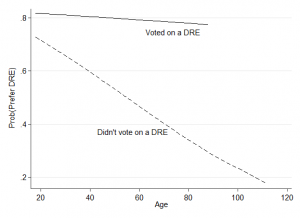 This is what the relationship looks like among those who say they would prefer to vote on “a paper ballot scanned and counted by a computer”: 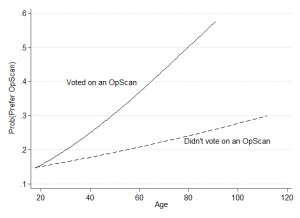 This graph is a mirror of the first.  Among current optical scan voters, younger voters would prefer to be voting some other way, while older voters like what they have.  Among those who voted on something other an optical scanners (and there were a few hand-counted paper ballot users in the mix), there’s a small tendency of older voters to prefer something else.

One caveat in all of this is that the survey mode is via the Internet, so it’s not surprising that the respondents overall preferred DREs to optical scanning, 57% to 25%.  Leaving aside the overall level of support, the age dynamics are interesting.  Younger voters are more likely to prefer DREs than older voters, particularly in counties that use paper.  This suggests an interesting future in the battles over the appropriate use of electronic technologies at the polls.