I spent yesterday visiting five different polling places in Boston (one of them twice), during the preliminary mayoral election. I chose the precincts randomly, though I used a method that assured me I would hit some big-registration precincts and some smaller ones.

One of the things I did was sketch the layout of each of the precincts I visited. I’ve attached cleaned up versions of those sketches to this posting (using that great drafting package, PowerPoint). As my geologist spouse would require me to say, these are not to scale; however, the sketches that look the most crammed together were the most space-constrained.  I haven’t identified the precincts, because that’s not important. What is important is the variability.

(1) Local officials frequently remind us that they do not own the spaces they use, which was definitely true here. (The point was driven home when the building owner of one polling place decided to start power-washing the building, directly over its entrance, right as voting began.) These were all brightly lit, safe, pleasant spaces, but none was optimized for voting.

(2) The amount of space available for the voting equipment was loosely correlated with the amount of business or amount of equipment.  As a corollary of point (1), sometimes the best available community spaces required the city to cram a bunch of equipment together.

(3) The flow of the space varied more than I expected.  The two set-ups below which had a separate entrance and exit clearly worked better than the three that had a single entrance.  (I didn’t choose the precincts for this reason, but notice that the best rooms for traffic flow were the ones that only had one precinct; the three polling places with a single entrance/exit also had two precincts, which only compounded the amount of jumbled traffic.)

(4)  Not shown here:  the gaggle of a dozen reporters/campaign workers who swarmed into “Precinct 1” right as polls closed, looking to get the results as soon as they were printed off the scanner.  As far as they were concerned, this was party time.  They seemed little concerned that the poll workers were trying to do the very exacting task of checking their work and closing the precinct in an orderly fashion.  I can only imagine what the campaigns would have said/done if the precinct workers had gotten something wrong in the close-up — but, it’s not like their representatives on site were really concerned about the fact that the poll workers still had a job to do.

Here are the sketches.  Click on them to get a bigger view. 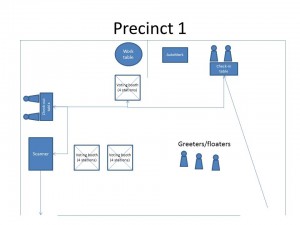 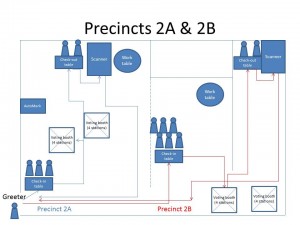 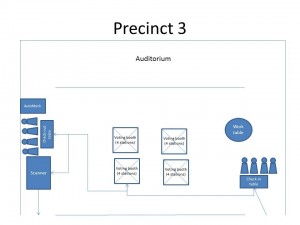 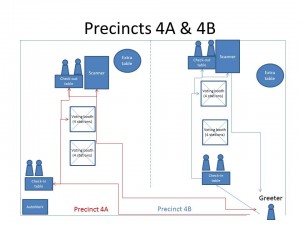 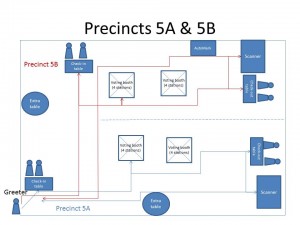