First, the consistency in this year’s early voting trends: the volume exceeds 2010.

Second, the deviation: the stark partisan contrast with 2010 did not appear yesterday. At this point in 2010, the Democratic share of the in-person early voting population began to shoot up, as the election approached. Yesterday, there was a small increase in the Democratic share, but the overall mix is now much closer to 2010. The natural thing to wonder is whether late-period early voters in 2010 became early-period early voters in 2014. We’ll see.

(As always, click on the graphs to get the full figures) 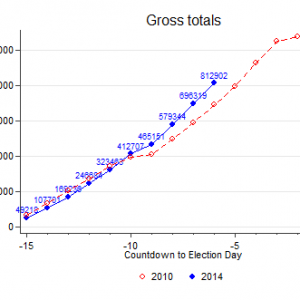 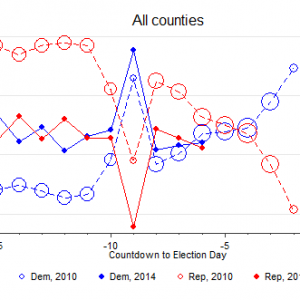