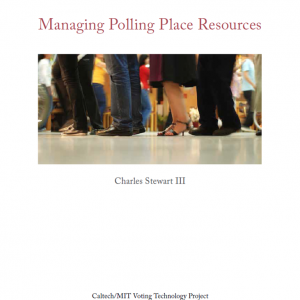 Just as the one-year count-down for the 2016 presidential election has begun, the Caltech/MIT Voting Technology Project has released a new report today about managing polling place resources.  Click here for the executive summary, and here for the full report.

This report serves as a companion to a set of Web-based tools that the VTP developed and posted at the request of the bipartisan Presidential Commission on Election Administration (PCEA), to facilitate the recommendation that local jurisdictions “develop models and tools to assist them in effectively allocating resources across polling places.”

The report takes several new steps in the effort to spread the word about the usefulness of applying queuing theory to improve polling place practices.  First, it provides a single source of facts about lines at polling places in 2012 (with some updating to 2014).  Second, it provides a brief, intuitive introduction to queuing theory as applied to polling places — with a brief list of suggested readings for those who would like to learn more.  Finally, the report uses data from two actual local election jurisdictions and walks through “what-if analyses” that rely on the application of the resource allocation tools.

The report released today provides basic facts about where long lines were experienced in 2012 and which voters — based on race, voting mode, and residence — waited longer than others.  Information about the 2014 election updates previous research, and underscores how long lines tend to be more prevalent in on-year (presidential) elections than in midterm elections.  Beyond providing basic facts about the location of lines in American elections, the report provides a basic introduction to the science of line management, queuing theory, and a list of further readings for those who wish to delve more deeply into the subject.  Finally, this report demonstrates how the Web-based tools might be used, by working through actual data from two local jurisdictions.

The report is part of the Polling Place of the Future Project (PPOTF) of the VTP, which has been generously supported by the Democracy Fund.  Since the release of the PCEA report, the VTP calculator website has been visited thousands of times by users across the country (and around the world.)  We have received feedback from numerous jurisdictions about the utility of these calculators, as state and local officials try to effectively allocate their limited resources.

In recent months, two of the resource calculators have been updated, and those updates have been posted on the site.  The new versions include improvements to the user interfaces and the ability to upload data from multiple precincts, which allows the simultaneous analysis of hundreds of polling places for large jurisdictions.

With the one-year countdown to Election Day 2016 already underway, some might say that it is too late to make use of such analytical tools to make a difference in the next presidential election.  However, my experience is that most election administrators are always looking for ways to improve the experience for voters; thus the publication of a report that highlights how existing tools might help them prepare for November 2016 comes at the right time for those election administrators who are looking to fine-tune their plans for next year.