Ned Foley and I recently published two pieces of commentary, here and here, about ballots counted following election day.  Most people don’t realize this, but the election results released election night are unofficial, and are subject to updating and correcting.  Important to the updating is the counting of provisional ballots and mail-in ballots that are considered in the days leading up to the official certification of results.

In these two commentaries, we described the so-called “blue shift” that has been evident in vote counts since 2000.  The blue shift is a term given to the pattern we see, which is that the nationwide vote share has tended to shift a little bit toward the Democratic presidential candidate after election night.

A natural question to ask is whether the late-counted ballots are sufficient in this election to switch any of the states that have currently been called for the candidates.  The answer at this point seems to be “no.”  But,  New Hampshire — a state that is currently “too close to call” — has a margin so tight that the race could conceivably go either way.  (As of this writing, Clinton is ahead of Trump in the counting by 1,371 votes, out of roughly 700,000 cast.)

I have done some quick analysis, in which I’ve taken the current vote totals (as of 9:30 Wednesday morning).  I have then gone back to the 2012 presidential returns and compared the final, official results with the unofficial returns reported Wednesday morning following the election.  Taking this as an estimate of the “blue shift” we might expect in the coming days, I then add this to the current unofficial results to see how much the current preliminary tally might change in the coming days.  The following graph summarizes the results. 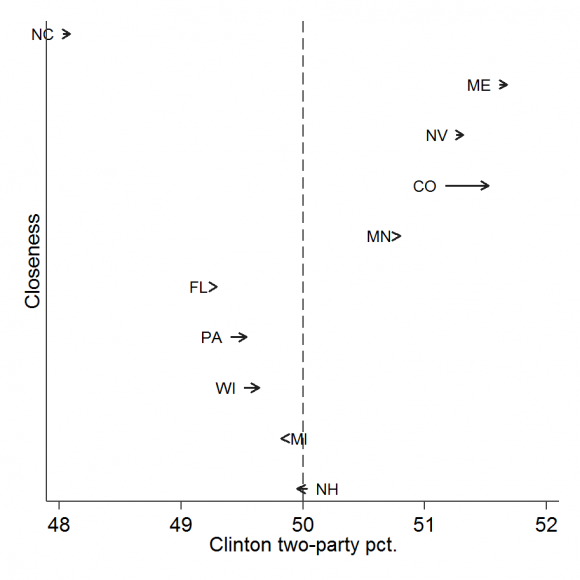 I’ve shown the ten states with the closest vote margins.  The arrows start with the current two-party vote share for Clinton and then add to it the fraction of the vote received by Obama in 2012 during the post-election counting period.

Note that only New Hampshire is close enough to 50/50 that the final count could flip the results from one candidate to the other.  The bad news for Clinton here is that New Hampshire actually experienced a “red shift” in 2012, so that this scenario predicts that the vote counted post-election would be to Trump’s advantage. (Because NH is an election day registration state, it’s later-counted ballots are dominated by absentees and late-arriving counts, not by provisional ballots.)