Last Thursday I helped kick off Pew’s Voting in America event by reviewing the preliminary findings from the 2016 Survey of the Performance of American Elections.  (My presentation begins at 1:06:55 in the YouTube video.) While there is a little more work to be done in wrapping up all the data gathering, we have enough responses in to begin painting a systematic view of the election process in 2016 from the perspective of the voters.

One important piece of news from that presentation is that average wait times to vote were down in 2016, compared to 2012, particularly in the states that had the longest waits in 2012.  The following graphs shows the overall perspective.  Here, I have plotted average 2016 wait times against average 2012 wait times.  States below the diagonal line had shorter lines in 2016.  I’ve labeled the states that had the biggest improvements.  Note particularly the drop in Florida times, from an average of 45 minutes to less than 10 minutes. 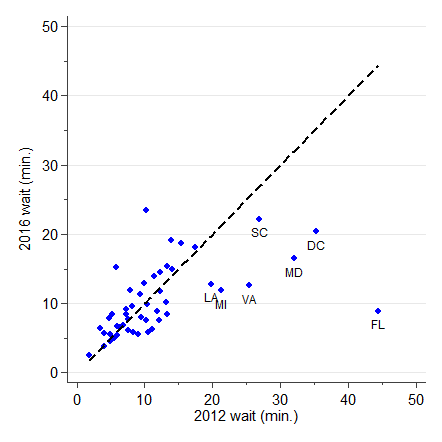 This is significant news, and a tribute to all the work that went into making the 2016 election run smoothly, despite public comments intended to cast doubt on the quality of American election administration.  The news is a feather in the cap of the bipartisan Presidential Commission on Election Administration, whose creation was spurred on by images of long lines in the 2012 election, both on Election Day itself and in early voting.

Nonetheless, this is at least preliminary evidence that when the elections community puts its mind to it, real improvements can be made in the experiences of voters.