By now, I would hope that the idea that early voting patterns reliably predict the eventual outcomes of an election would have died a dignified death. Last week, Philip Bump provided some useful analysis into the tendency of the two parties to vote early in presidential elections.

Bump’s analysis was a useful start, but because it was ultimately based on election returns from the six states that broke out results by mode of voting in 2016 (Election Day, early, and absentee/mail), it is of limited generalizability.

One way of answering the question, “do Democrats rely more on early voting than Republicans” is to look to public opinion surveys.  Luckily, there are now two academic studies with sufficient observations for each state that we can look at the question for each of the fifty states.

Those two studies are the Cooperative Congressional Election Study (CCES) and the Survey of the Performance of American Elections.  The CCES draws a representative sample from across the country.  In 2016, the CCES had 64,600 respondents, ranging from 99 in Wyoming to over 6,000 in California.  The SPAE draws representative samples from each state — 200 from each state plus DC, for 10,200 overall.  Both surveys are conducted by YouGov using similar questions.  By adding the SPAE results to the CCES sample, we boost the number of observations available from the smaller states. 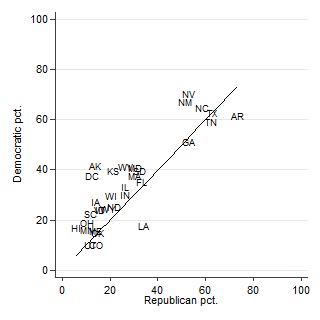 Early voting by Democrats and Republicans in 2016

The accompanying graph plots the percentage of Democratic respondents in each state who reported voting early (and in person) against the percentage of Republicans who reported the same.  (Only states in which more than 10% of voters reported voting early are included in the graph.) Note that in virtually every state, Democrats were more likely to vote early than Republicans.  Louisiana and Arkansas were the notable exceptions.

So, using a broader data set, Bump’s analysis is confirmed.

Furthermore, it is possible to expand the analysis back to 2008 and 2012, which is done in the following two graphs. Note that Democrats were also much more likely to use early voting in 2008 in most states (Arkansas is against an exception), but not in 2012.

Some general points to end: