Beginning today, I hope to post a weekly graphic that I have produced, or that has been produced by one of the team members of the MIT Election Data and Science Lab, that provides some new or interesting insight into how elections are run in the United States.

This week, the subject is voter confidence.  This is a big topic.  Lots of people make claims about voter confidence, particularly what causes it to go up or down, oftentimes tying these claims to support for some type of election reform.

Below you see the results.  With only three exceptions (Maine, Michigan, and Pennsylvania), the more-confident partisans in a state match the party of the presidential candidate who won the state. 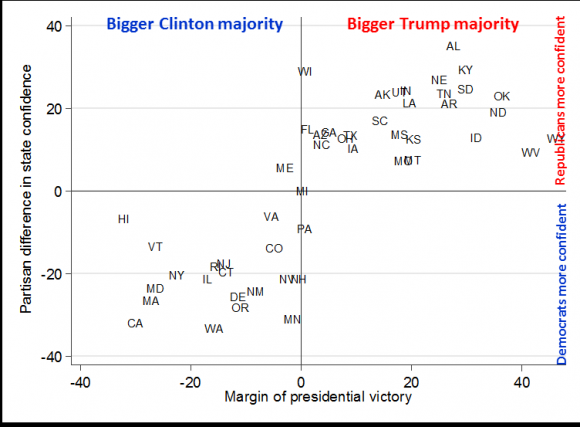 There are some states with less polarization than we would expect (Wyoming, West Virginia, and Hawaii) and some with more (Alabama, Washington).  Understanding why this is will have to wait for another day.