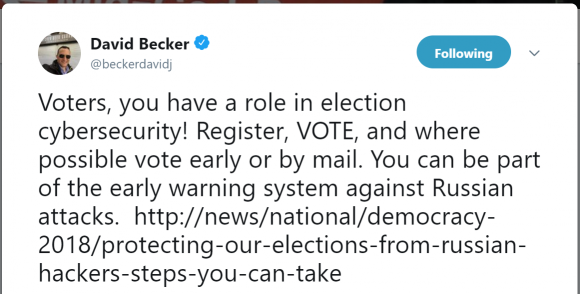 wo of my best friends and closest confidants in this business, Paul Gronke and David Becker, just exchanged tweets about using early and absentee voting as an early warning device.  What this exchange brought to mind was the Florida congressional district 13 race in 2006, which I played a small part in as an expert witness for one of the candidates, Christine Jennings.  (You can see my old expert report here.)

First, the setting:  The 2006 Florida 13th congressional district race was, at the time, the most expensive congressional election in American history.  It pitted Republican Vern Buchanan against the Democrat Christine Jennings.  Buchanan was eventually declared winner by 369 votes, out of over 238,000 cast for the candidates.

(As an aside, this was my first court case.  The biggest surprise to me, among many, was that the other side of the case — which consolidated the county, ES&S, and Buchanan — pretty much conceded that Buchanan’s victory was due to the undervote problem in Sarasota County.  But, that’s a story for another day.)

Here’s another piece of background, which gets us closer to the Becker/Gronke exchange:  Part of the evidence that there was something wrong with the voting machines, and not just Sarasota County voters choosing to abstain, was that the undervote rate in early voting and on Election Day was much greater than the absentee voting in that county.  This is important because early voting and Election Day voting were conducted on paperless iVotronic machines, whereas absentee voting was conducted on scanned paper.

Here’s the factiod from this case that the Becker/Gronke exchange brought to mind.  Note the difference in the undervote rate in Sarasota County between early voting (17.6%) and Election Day (13.9%).  The Election Day rate wasn’t dramatically lower than the early voting rate, but it was lower, and probably not by chance.

During the early voting period, voters complained to poll workers and the county election office that (1) they hadn’t seen the Jennings/Buchanan race on the computer screen and (2) they had had a hard time getting their vote to register for the correct candidate when they did see the race on the screen.  This led the county to instruct precinct poll workers on Election Day to remind voters of the Jennings/Buchanan race, and to be careful in making their selections on the touchscreen.

Of course, the fact that the undervote rate on Election Day didn’t get back down to the 2%-3% range points out the limitations of such verbal warnings.  And, I know that Jennings supporters believed that the county’s response was inadequate.  But, the big point here is that this is one good example of how early voting can serve as a type of rehearsal for Election Day, and how election officials can diagnose major unanticipated problems with the ballots or equipment.  It’s happened before.

Thus, I agree with David Becker, that early voting can definitely help election officials gain early warning about problems with their equipment, systems, or procedures.  I would amend the point — and I think he would agree — that this is true even if we’re not concerned about cybersecurity.  Preparing for elections requires that millions of small details get done correctly, and early voting can provide confirmation that the preparations are in order.

I don’t know of evidence that absentee voting serves as quite the same type of early-warning system, but it makes intuitive sense, and I would love to hear examples.

Two final cautionary thoughts about the “early voting as early warning idea,” as attractive an idea as it is.  First, I’m not convinced that many, or even any, voters will vote early because they want to help shake-out the system.  Indeed, there’s the possibility that if a voter believes there are vulnerabilities that will only become visible during early voting, but that are likely to be fixed by Election Day, it would drive them to wait until Election Day.  Let other people shake out the system and risk discovering that something needs to be tweaked or fixed.

Second, we always need to be aware of the “Robinson Crusoe fallacy” in thinking about how to respond to risk.  The Robinson Crusoe fallacy, a term coined by game theorist George Tsebelis in a classic political science article, refers to the mistakes one can make when we think we are playing a game against nature, rather than playing a game against a rational opponent.  If the game is against nature, the strategies you choose don’t influence the strategies the opponents choose.  (Think about the decision whether to bring an umbrella with you if there is a possibility of rain.  Despite what my wife and I joke about all the time, bringing the umbrella doesn’t lower the chance of rain.)  If the opponent is rational, your actions will affect the opponent’s actions.  (Tsebellis’s example is the decision to speed when you’re in a hurry and the police might be patrolling.)

A bad guy trying to disrupt the election will probably not want to tip his hand until as late as possible, to have maximal effect. Thus, “early voting as early warning” is probably most effective as a strategy to ensure against major problems on Election Day that occur due to honest mistakes or unanticipated events.

I don’t know if “early voting as early warning”  is the best justification for voting early, but it’s not a bad one, either.  It’s probably best at sussing out mistakes, and probably will be of limited use in uncovering attacks intended to hurt Election Day.

But, that’s OK.  I continue to be convinced that if any voter is going to  run into a roadblock in 2018 in getting her vote counted as intended, it will probably be because of a problem related to good, old-fashioned election administration.  The need to ensure that the blocking-and-tackling of election administration is properly attended to is reason enough for me to learn about the system from early voting.