The modelers at FiveThirtyEight have made a compelling case that we should expect Republicans to pick up a seat or two in the upcoming U.S. Senate election.  The purpose of this post is to show that this is essentially the same prediction we would have made two years ago, once we knew a Republican would be president at the midterm.

Before launching in, I must do my political science duty by recommending a symposium on election forecasting that appeared in  the October edition of PS: Political Science and Politics.  You can access that symposium by clicking here.

The presidential partisanship model focuses on the role of the president in driving outcomes of national elections.  It is obvious that we would take into the account the party of the incumbent president in predicting the outcome of a midterm Senate election, because midterm elections are always, in part, a referendum on the incumbent’s performance.  We take into account the party of the previous president because the class of senators running for reelection in a midterm were last elected when the previous president was on the ballot.

For 2018, Republican Senate candidates are disadvantaged by the fact that the incumbent president is a Republican.  This would be true if the Republican were named Donald Trump or John Kasich.  Since 1946, Republicans have lost an average of 2.9 seats in the Senate when the president at midterm has been a Republican, compared to gaining 4.4 seats under Democratic presidents.

At the same time, Republican Senate candidates in 2018 are helped by the fact that the class of senators up in 2018 was last elected in 2012, which was a moderately good Democratic year — Barack Obama was elected president, Democrats picked up a net of eight seats in the House, and picked up two seats in the Senate.  Since 1946, Republicans have gained an average of 3.6 seats in the Senate when the previous president was a Democrat, compared to losing 2.0 seats when the previous president was a Republican. 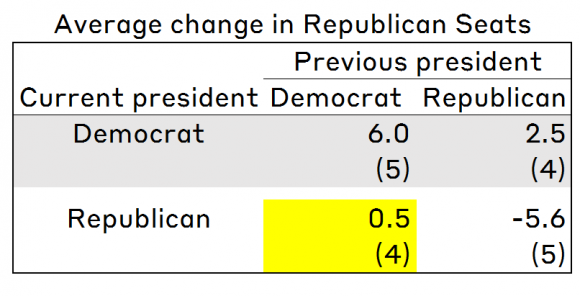 We can put these two factors together.  The accompanying table shows the average change in Republican Senate seats since 1946, based on the party of the current and previous president.  The cell colored yellow is the one relevant to 2018 — Republican incumbent and Democrat previous president.  Note that the average change in Republican seats under these circumstances has been half a seat, which is essentially the same as FiveThirtyEight’s prediction of 0.8 as of this morning (Sunday before Election Day).

The seats-at-risk model can be thought of as modifying the presidential partisanship model in one important way.  Rather than just noting the partisanship of the previous president, we can note how much of a boost to that president’s party was experienced in the senatorial election.  It is reasonable to expect that Senate candidates swept into office on the coattails of a presidential candidate will do worse the next time the president is not on the ballot.  If the president has long senatorial coattails, that means the number of vulnerable Senate seats will be greater six years later (without the same president on the ballot)  than if the coattails were short. 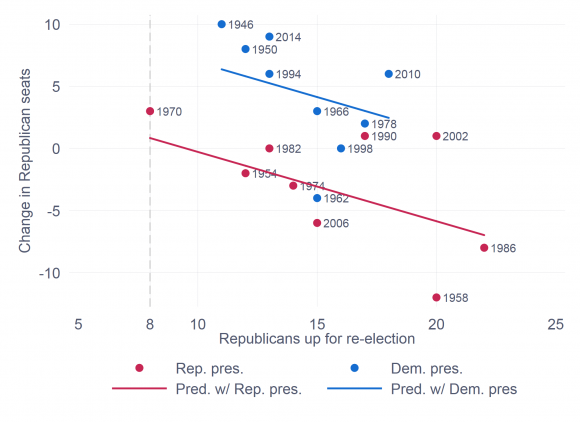 One way to illustrate this is in the accompanying figure.  The figure is a scatterplot that shows the net change in Republican seats plotted against the number of Republicans up for re-election.  Red circles are midterms with Republican incumbents; blue circles have Democratic incumbents.  The two lines are simply the result of fitting a linear regression through the data, with a dummy variable indicating whether the incumbent president is a Republican.

This graph illustrates the two major features of the seats-at-risk model.  First, fewer Republicans up for re-election are correlated with more Republican gains in the Senate.  Second, Republican presidents at midterm are associated with smaller gains/bigger losses.

On the x-axis I have indicated the number of Republican seats up for reelection in 2018, eight.  Note that the point prediction of the change in Republican seats in 2018 is a pick-up of 0.8, precisely what FiveThirtyEight is predicting today.

The point of this posting has been to provide a bit of historical context to the most likely outcome of the upcoming Senate election — Republicans might pick up a seat or two.  These models — and the much more sophisticated ones that one can read in the political science literature — don’t need to know anything about the factors that are currently the subject of so much discussion, such as the unpopularity of the president, political polarization, the mobilization of the resistance, and the counter-mobilization of the President’s base.

There are two things that this posting is not.  First, it is not a dig at more sophisticated models, such as one finds in the political science literature or on websites such as FiveThirtyEight.  In fact, it’s just the opposite.  The value of these more sophisticated models is that they allow us to probe generic “fundamental” expectations in more depth.

Second, this posting is not an effort to argue that campaigns don’t matter, or that current political activism doesn’t matter.  Yes, as I’ve noted, it’s possible to generate plausible predictions about the outcome of the 2018 Senate election without any reference to any “real world” politics.  But, it’s also important to note that these simple models work because they are characterizing a political system that is in a type of equilibrium, such that when one set of conditions is met — for instance, a Republican incumbent is in place at midterm following a Democratic president — the political environment shifts in predictable ways.  Those working pieces are difficult, if not impossible, to model with a high degree of confidence.  That’s why we work with the simpler models.

We won’t know whether these predictions work out until all the votes are counted, which won’t be until the days and weeks following Election Day.  We can be certain that the actual results will deviate from the predictions, at least somewhat.  But, I’m also feeling confident that the analytical tools at our disposal will help up to make sense of what can sometimes seem like chaos.