The turnout numbers for Oregon, with four more days to go, are in, and it looks like Republican and Unaffiliated voters are returning their ballots at a higher clip than Democrats.

The two graphics below compare the turnout in 2006, with a line demarcating the Friday before Election Day, with the ballots processed thus far in 2010. Democrats are running 4,000 above 2006, small enough to be accounted for by population changes. 22,000 more GOP ballots have been returned than at this same point in 2006, and nearly 14,000 more Unaffiliated ballots have come back.
The result is a partisan return advantage of only 18% in 2010, compared to a 25% gap at this same point in 2006. I’ve been hearing talk of major GOTV efforts occurring this weekend in many Democratically leaning areas of the state, and this explains why. 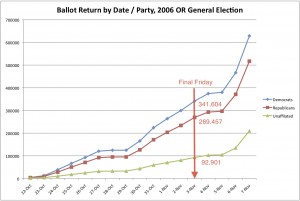 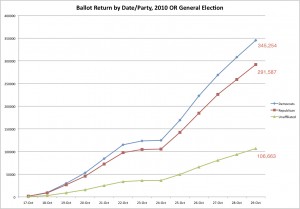