Here are the latest statistics for in-person early voting in Florida. The two patterns I have been following, total turnout and partisan composition, continue to hold.

First, turnout for in-person early voting continued to exceed 2010, with aggregate turnout about 20% above 2010.

Second, the partisan composition of the in-person early voting electorate has remained fairly stable.  As in 2010, there was a slight up-tick in Democratic turnout and a slight down-tick in Republican turnout yesterday.  However, in 2010, these up- and down-ticks were much more dramatic.  For those who have been trying to gauge what this means for possible outcomes, it bodes better for Scott and worse for Crist.

To mix things up, rather than show cumulative totals, I’ll show day-to-day total turnout, so that the persistence of the daily increase in in-person turnout compared to 2010 is clear. (Click on the figure for the full graph.)

Here is the partisan composition day-to-day.  Presumably, with a souls-to-the-polls drive today, we should see a surge of Democrats in tomorrow’s graph.  It will be interesting to see how it compares to 2010. 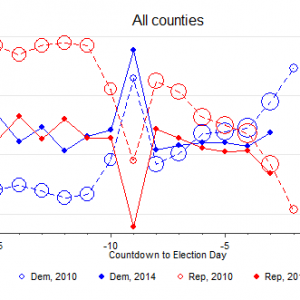