Political observers will remember the 2003 California gubernatorial recall election, where 135 candidates ran in the election to replace Governor Davis. Rod Kiewiet and I wrote about how this complex election produced difficult decision problems for voters, and in a different paper (with Goodrich, Kiewiet, Hall and Sled) I also wrote about how the complexity of the recall election posed administrative problems for election officials.

The upcoming June primary in California is shaping up as one where again we have a complicated race, though this time it is for the U.S. Senate. In the primary for the U.S. Senate there are 34 candidates competing to win the primary, and to move on to the general election in November. There have been a few preliminary reports in the media about how the crowded ballot might be problematic for voters when they try to find their candidates in the primary election.

So I took a look at the sample Democratic ballot for Los Angeles County, which is reproduced below. The first page is designed to tell voters that the ballot for the U.S. Senate will have two pages, and it reproduces each page. 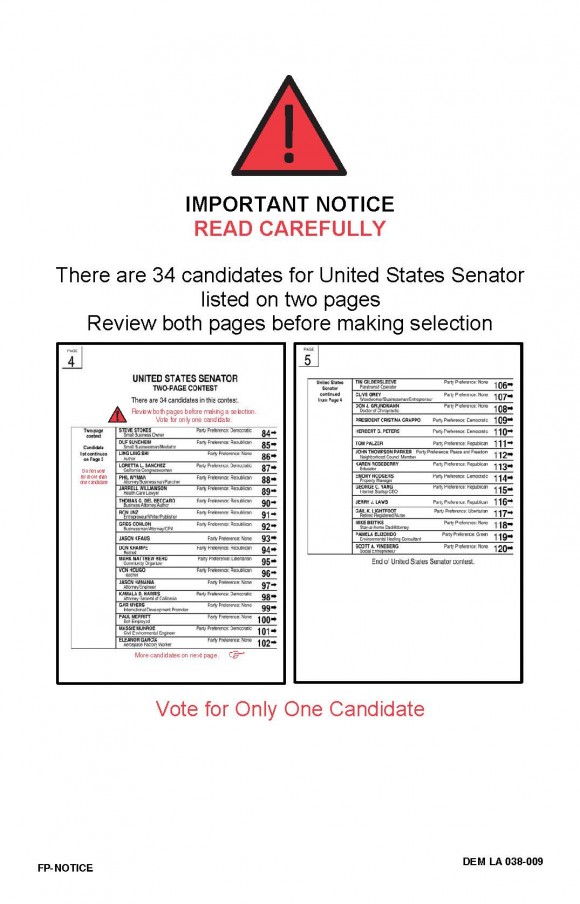 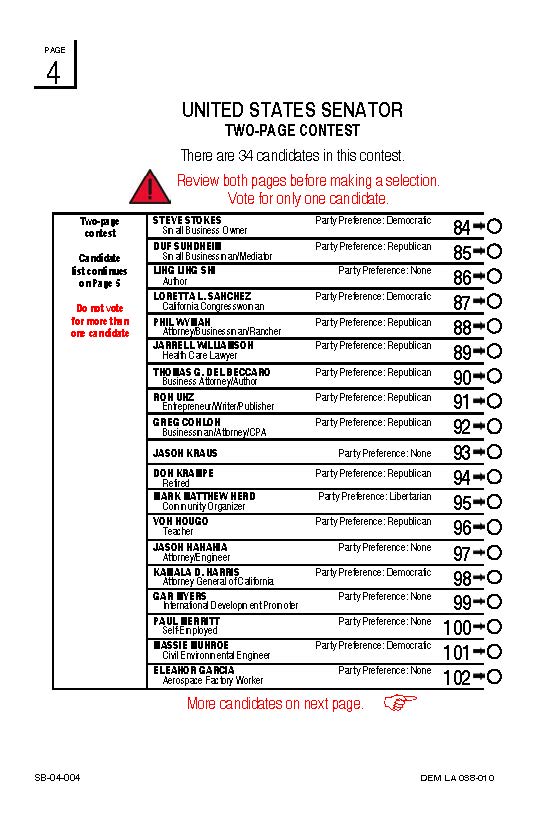 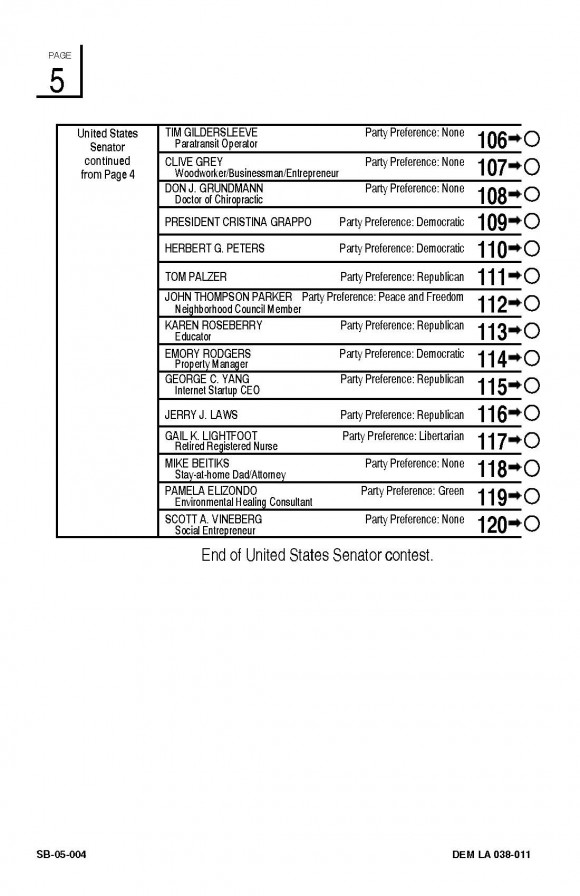 This is just an example from L.A. County, which uses a unique voting system (“InkaVote”). While the sample ballot provides ample warnings to voters to only vote for one candidate, and to check both pages for their candidate of choice, there’s a good chance that we’ll see voters make mistakes. In particular, we may see a increased risk of overvotes for the U.S. Senate race, as some voters may not understand that they are only supposed to vote for one candidate (or not see the warnings) and instead may believe they are supposed to make a mark for a candidate on each page. We may also see voters get confused and just skip this race, which might result in an increased rate of undervoting in this election.

As other counties are using different ballot designs and layouts for this race, this is just an example of what might happen in L.A. County. Given the complexity of this ballot and election, there’s a good chance that we might see increased rates of both undervoting and overvoting across the state this June, though the exact causes for that will depend on the specifics of ballot design and layout in each county.

Whether these designs and layouts lead to systematic voter errors of the sort seen in 2000 is not clear at this point, as I’ve not had a chance yet to look at sample ballots from many of the larger counties in the state. However, we do know from research published about the infamous “butterfly ballot” used in Palm Beach County in the 2000 presidential election, even a relatively small number of voter mistakes can be influential in a close election (see the paper by Wand et al. on the butterfly ballot). If the U.S. Senate primary is close in June, we could see some scrutiny of ballot design and layout, and whether problems with design and layout may have led to voter error.