At the risk of being lost down a rabbit hole and subject to endless trolling, I just have to weigh in on the so-called evidence of vote fraud that was contained in Roy Moore’s court filing, in which he tried to get a delay in having the vote certified.  (The reason I decided to plow ahead is that Moore’s filing points out an interesting pattern in the precinct returns — it’s just that it’s not evidence of vote fraud.)

There are a lot of claims made in Moore’s filing, and I don’t pretend to have time to take them all on.  The one that has the look of seriousness is based on some number crunching by Philip Evans, an electrical engineer from South Carolina who has taken a look at the precinct-level election returns from Jefferson County (Birmingham) and declared them to be impossibly skewed — or, as Mr. Evans  puts it, based on analyzing more than one hundred elections, “never has there been the level of statistical proof on the scale of Jefferson County” that the results were fabricated.

The analysis then simply shows the distribution of this difference (Moore % – Straight Republican %) for each precinct.  Here is a screen shot of the graph Mr. Evans uses. (Click on the graph to enbiggen it.) 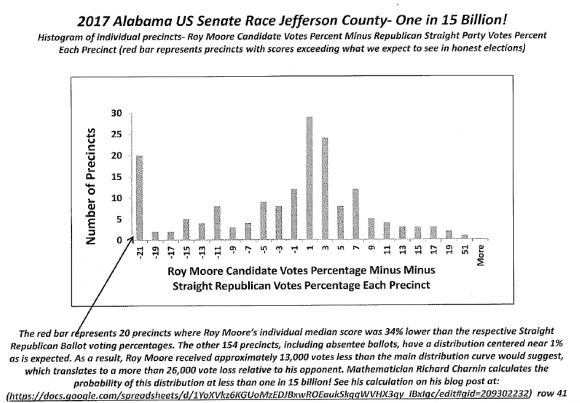 For starters, the gist of the argument is that the figure above doesn’t follow a normal distribution, which alone is evidence of fabricated election results.  I know of no reason the distribution should follow the normal distribution.  Most of the political world isn’t distributed normally (or Poisson, or uniform, or any other favored distribution).  That’s a red herring.

The real issue is whether the relationships between variables look anomalous.  The graph above didn’t answer the question about relationships, so the first thing I did was to recast it in a way that explores the implied relationship among variables that are conflated when we just gaze at a single distribution.  So, I created a graph of the % of the vote that Moore received purely as a candidate against the % of the vote that the Republican Party got on the straight-party line.  This is what that graph looks like. (Click to enlarge.) 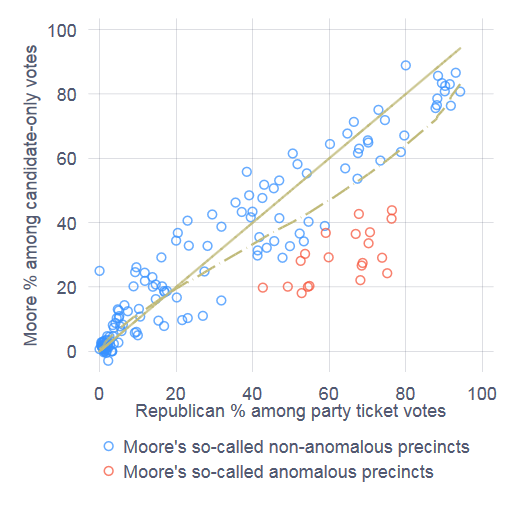 The data are as described in the previous paragraph.  The solid gray line is the 45-degree line.  The dashed line is a non-linear best fit to the data.  (For those keeping score, this is a lowess fit.)

Note that the red precincts — the one Moore called “anomalous” — are relatively competitive.  In fact, given that Jefferson is a Democratic county, these are relatively strong Republican precincts for the county.

So, it appeared that Moore as a stand-alone candidate under-performed in moderately Republican precincts in Jefferson County, compared to those who voted a straight ticket.

The Moore court filing suggests that patterns like this can’t be explained.  Quite the contrary.  The precincts that the Moore campaign seem so worried about are precisely the types of places that commentators were speculating about ahead of the election:  solidly Republican areas that just couldn’t stomach voting for Moore.  Also, because these are precincts where party loyalties are closely balanced, I would bet that they are full of voters that political scientists call “pivotal,” that is, voters who could go either way in an election.  Again, these were precisely the voters who were up for grabs in the special election.  And, it’s also these precincts where you might expect to find more Republicans “voting the party, not the man.”

Finally, there’s the empirical issue of how correlated “candidate-only votes” and “party votes” are at the precinct level in a less controversial election.  Turns out, they’re not as highly correlated as you would expect.  For instance, the following analysis reproduces my scatterplot, this time using the precinct election returns from Jefferson County in the 2016 presidential election. 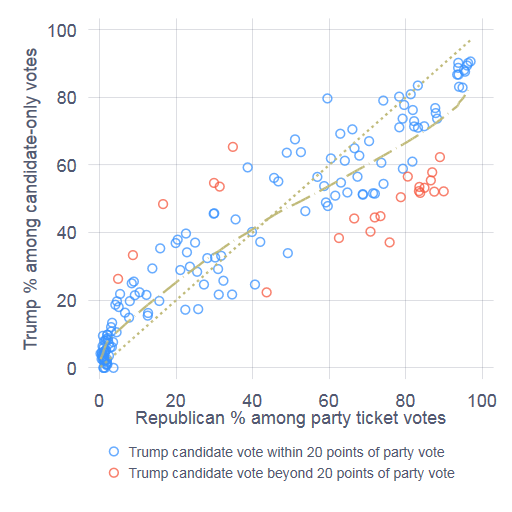 Here, I’ve highlighted “outlier” precincts in red, using the same criterion as before.  (I.e., the red precincts are more than 20 points away from the diagonal line.)  Unlike the special election, there is a bit more symmetry on both sides of the line.  Still, Trump as a candidate was more likely to under-perform the Republican straight-ticket line than Clinton was to under-perform the Democratic line.  And, the under-performance was more common in precincts that moderately leaned one way or the other — again, the type of precinct where you might find more wavering partisans, because of the context in which they live.

So, the pattern that was used by the Moore campaign to claim fraud was different in details from 2016 in Jefferson County, but only in the details.  In 2016, both parties arguably had flawed candidates, and thus it’s not surprising we would see the parties’ candidates under-perform their party in a few precincts.  Nor is it surprising that the precincts where they under-performed would be relatively central to the overall partisan space.

To conclude, I’m the last person in the world to say you shouldn’t mine through election data looking for evidence of erroneous election returns, either due to fraud or human error.  But, finding what appears to be anomalies is just the beginning.  The next step is that the person suspecting fraud owes it to everyone to consider alternative explanations.  In the case of the 2017 Alabama special election, what appears to be anomalous is easily explained in terms of well-known campaign dynamics — and may not be as anomalous as it first appears.  Finally, any charge of fraud (or human error) needs a mechanism to hang the story on.  There was just no plausible mechanism proposed in Alabama.  (The implied mechanisms were so out-there that they don’t deserve to be mentioned.)