A few years ago Ned Foley identified a growing trend in post-election canvasses:  there is a tendency, at least in presidential elections, for the Democratic share of the vote to grow between the initial election-night count and the final, official canvass of the vote.  He referred to this as a “big blue shift,” paying homage to the association of the Democratic Party with the color blue.  Ned and I have written together on this, including a conference paper that I hope we can resurrect soon, and a Monkey Cage/Washington Post op-ed we published on the morning of the 2016 election.

While there is no claim that the blue shift will show up in every election, changes to election laws over the past two decades have created a set of ballots that require special handling, and which are often only resolved in the days and weeks following the election.  The largest set of these ballots are absentees, which have been weakly (and inconsistently) trending Democratic over time, followed by provisional ballots, which are much more regularly Democratic.

This is a tiny difference, but it was pervasive in the state, as the accompanying graph shows.  (If you want to read the details, I’m afraid you’ll need to print it out and use a magnifying glass.  Click on the graph to enlargify it.) 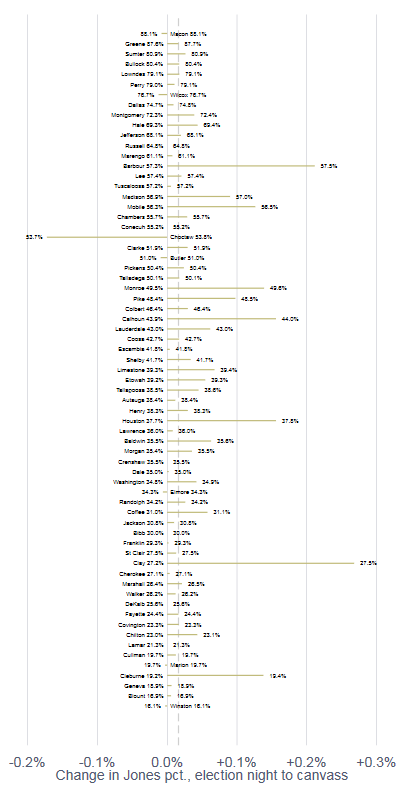 It’s easy to see here how relatively uniform the shift was across the counties.  The Jones percentage of the vote increased in 54 counties, declined in 7 and didn’t change in the remaining 6.  In only 8 counties was the magnitude of the difference greater than a tenth of a percentage point, and only one of those (Mobile) could be considered a large county.  (Jefferson County, the state’s largest county, which got beat up in Roy Moore’s filing attempting to delay certifying the vote, came out almost exactly at the state average.)

Election officials often say that their job isn’t to get the vote count fast, but to get it right.  Here we see in Alabama a small example of how vote totals shift from election night to the final canvass.  Given the controversy surrounding the election, it was probably a blessing that Jones had won the election night count, even by a little, so that the blue shift didn’t enter into the post-election count.  One can only imagine what would have happened had Moore been ahead on election night…