The value of a presidential commission is that it draws attention to an issue and can serve as a focal point as public opinion is mobilized for policy change.  Both ardent supporters and opponents of the Presidential Commission on Election Integrity saw the commission as filling this role in the case of vote fraud and voter registration.

Because the most prominent member of the commission, Kansas Secretary of State Kris Kobach, has developed a reputation as a determined opponent of voter fraud, it was reasonable to expect that had the commission continued conducting business, it would have been an amplifier of claims about the high prevalence of voter fraud in the U.S.  The commission never served this function, both because of its premature demise and because the news surrounding the commission was muddied by its controversy.

However, let’s consider the counterfactual.  What if the commission had not been terminated, and what if Kobach’s message about high rates of fraud had been given clear expression?  What would the effects of this messaging be?

We’re helped in answering this question by Kobach, who was interviewed by Breitbart on the subject of voter fraud on the day the commission was terminated.  In that interview, Kobach claimed that the vote fraud commission had revealed:

I turned these claims into a question that was asked of my survey respondents. (Go back to the previous posts to see details about the sample and other analysis.)  In particular, I randomly presented one of these claims to each respondent, identifying it as having been made by “the vice chair of the fraud commission.”  I then asked, “Does this statement make you more or less concerned about voter fraud?”

Thus, the respondents processed claims about voter fraud through the lens of partisanship.  This is consistent with much of the modern research into the effects of persuasive communicates, which generally teaches us that people readily internalize information that confirms prior beliefs and reject information that is dis-confirming.

This process is typically the most potent among the most politically engaged, who are the most aware about “what goes with what,” that is, most aware of the positions associated with the two parties.  And, true enough, that pattern shows up here, as well.  For instance, while 55% of Democrats stated that the statement they read about voter fraud did not change their concerns about fraud, 72% of the “hyper-aware” Democrats said they were unmoved.  (Recall, the “hyper-aware” respondents were those who both (1) closely followed news about the commission and (2) could pick out Kobach as a member of the commission.)  Among hyper-aware Republicans, 61% said they were even more concerned about fraud after reading the statement, compared to 55% of Republicans overall.

In other words, among the most engaged partisans, being presented with a claim about voter fraud just pushed them further apart from each other.

A similar pattern also emerges when we examine the responses to these statements in light of how concerned the respondents said they were about vote fraud at the start of the survey. (See Figure 1).  Among those who initially said they were the least concerned about vote fraud, 73% said that the statement they read about fraud didn’t change their mind.  Among those who initially identified themselves as being the most concerned about fraud, 72% said the statement made them even more concerned. 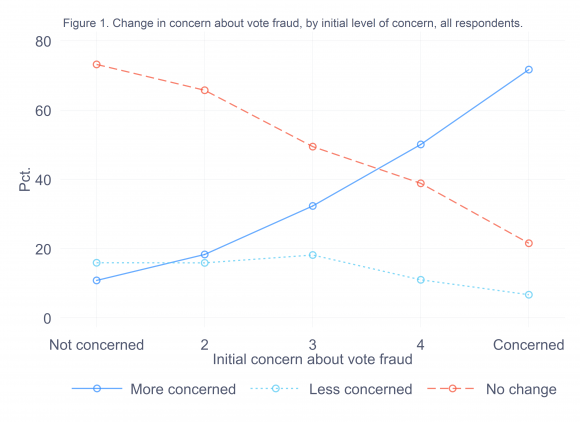 Among the four statements, which had the greatest effect on concerns about fraud? Table 2 provides the answer to the question.

What stands out here is the fact that the last two comments tended to elicit more expressions of additional concern than the first two.  Figuring out why this is requires some speculation, because each of the items mixes and matches stimuli.  Still, it strikes me that the last two items pertain to specific types of voter fraud (non-citizen voting and double voting), whereas the first two items refer to fraud in general terms.  It is possible that specific cases of fraud are more compelling than the general problem of fraud.  Or, it is possible that non-citizen and double voting in particular are especially compelling ways to frame the fraud question.  In any event, I am sure that others who are more expert in the field of persuasive communications than I am will be exploring this question further.

This has been a fast-and-furious tour of the new survey data about the Trump fraud commission and its termination.  I hope to be writing more about this in the weeks and months ahead.  For now, it is important to note that support for the commission and its termination was not as firmly linked to partisan attitudes as attitudes about fraud itself.  I have gone on record as saying that the termination of the commission only shifts the politics of vote fraud to other venues.  It remains to be seen whether those venues will be seen as having greater authority than the commission, and thus (perhaps) greater influence on what the public believes about fraud.

One reassuring message from the survey responses is that even Americans who were the most concerned about voter fraud were not up in arms about the commission’s termination.  This suggests an opening for bipartisan endeavors to secure the voting rolls that may be effective with the broad middle of public opinion.  There are already effective models of such efforts, ranging from states that carefully adhere to the NVRA, to the Electronic Registration Information Center.  Efforts such as these are likely to be more effective in securing voter registration lists while maintaining access to the ballot box than promoting messages that polarize attitudes further than they already are.

Note:  The research was supported by a grant from NEO Philanthropy, which bears no responsibility for the results or analysis.