Yesterday I wrote about a recent poll I conducted that revisited the question of whether voters thought computer hacking was a major problem in the November 2016 election.  That post noted that more Americans have come to believe computer hacking was a major problem in 2016 than they believed back then.  However, the majority of opinion change has come from Democrats.  You can read that post here.

The question that was asked in the survey specifically mentioned “computer hacking” in the “administration of the election.”  However, the issue of “hacking the election” rarely is that specific when it comes up in the news or informal conversations.  So, I decided to ask the respondents this question at the very top of the survey:

The following table shows the possible response categories and how they were distributed among the respondents.  A plurality of respondents chose one of the two options involving foreign actors, whether using social media to influence voters (20%) or breaking into the computers that run elections (25%).  A good number of people, 20%, said that “nothing in particular” came to mind when they hear talk of computer hacking in elections.

There is a partisan divide in how respondents think about the topic of election computer hacking, but the pattern is more complicated than Democrats simply thinking there’s a big problem and Republicans not. A majority of Democrats chose one of the two responses that focus on foreigners, compared to only 39% of Republicans.  However, Republicans were much more likely to choose the response about Americans breaking into election equipment.  Like I said, the partisan divide on this question is not straightforward.

It’s hard to know what’s going on here, with only one question in a limited survey.  However, my favorite hypothesis is that this is evidence that Democrats are focused on the “Russian hacking” narrative about the 2016 election, whereas Republicans, when they think about problems associated with the election, are drawn toward corruption of election administration itself.  My guess is that had I asked respondents which was the bigger election administration problem, breaking into voting equipment by foreigners or inside corruption of the process, the parties would have neatly divided on the question — but, that’s a question to explore in the future.

Returning to the issue of political knowledge, it’s not surprising that people who follow the news most closely are more likely to have an opinion about the question (in other words, the “nothing in particular” response is less common) and that the partisan patterns seen above are heightened.  This is shown in the next table

To put yesterday’s and today’s posts together, it is interesting to note that there is a link between first thoughts concerning election hacking and the degree to which one thinks that computer hacking was a major problem in 2016.  Respondents saying that foreign hacking of computers used in election administration was the first thing that came to their minds were the most likely to say that computer hacking was a major problem in 2016.  (See the figure below.* Click on the figure to enlargify.)  This was especially true among Democrats, and only somewhat true among Republicans. 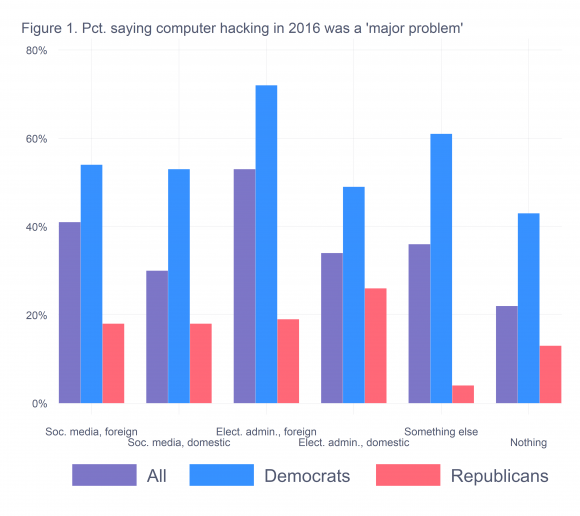 I concluded yesterday’s post by suggesting that Democratic and Republican constituents were likely to exert different levels of pressure on their parties’ legislators to do something about computer security in elections.  Today’s post suggests an amendment to that conclusion. In particular, the Democratic mass public seems convinced that (1) computer security in elections is a big problem, (2) the problem comes from outside the country, but (3) they can’t choose whether social media manipulation or voting machine hacking is a bigger problem.  In other words, security is a problem, and we’re being attacked from abroad.

The Republican mass public is not convinced that computer hacking of elections is a major problem; to the degree it might be a problem, they are more conflicted over whether it’s a domestic or foreign threat.

As is often the case in politics, it’s the side that has a clear diagnosis of a problem and its solution that drives the debate.  In that case, it’s the Democrats.  Of course, they don’t have the majority, at least in the nation’s capital, which may be a prescription for a lot of talk, and not a lot of action, from our national legislators.

Note:  The research was supported by a grant from NEO Philanthropy, which bears no responsibility for the results or analysis.

*The figure originally had an error in how the x-axis categories were labeled.  It has been corrected.