A recent survey of 2,000 adults shows that Americans have become more concerned about election hacking than they were in 2016, and that a partisan divide has widened over these concerns.

This is the second in a series of surveys I’ve taken in the past several months, where I have looked at opinions held by Americans about problems facing the electoral process. In a series of previous posts, I looked at public attitudes toward the Pence-Kobach Commission, on the heels of its termination in January. (You can find those posts here, here, here, and here.)

In this post, I look at the issue of hacking.

The story starts in November 2016, when I threw two questions onto the end of the Survey of the Performance of American Elections. These questions asked respondents to report how much of a problem they though computer hacking was in the administration of elections in 2016, both nationwide and locally.

Recall that news and rumors of hacking — of social media, campaign websites, voting machines, and voter registration files — were a part of the news diet at the time, but it hadn’t developed into the major, multi-pronged story that it is now.

What’s especially noteworthy about this change is the partisan detail. Although respondents in all three major partisan categories (Democrats, Republicans, and Independents) were more likely to view computer hacking in 2016 as a major problem, the biggest shift came among Democrats, who went from 23% viewing hacking as a major nationwide problem when asked about it in November 2016, to 56% when asked the same question this month. (See the accompanying figures; click on any of the figures to enlarge them.) The fraction of Independents viewing hacking in the 2016 election as a major nationwide problem grew from 16% to 30%; the fraction among Republicans grew from 10% to 18%. 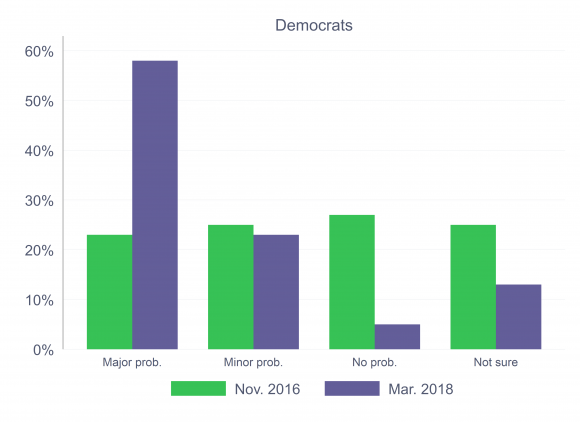 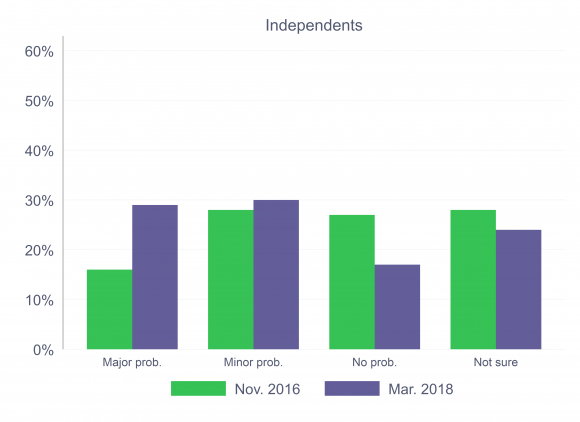 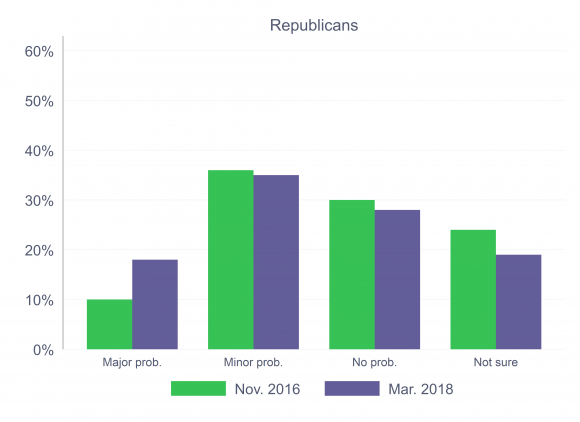 Similar partisan patterns appear when we look at the question of computer hacking as a local election administration problem. Among Democrats, the percentage saying that computer hacking was a major local problem in the 2016 election was 14% in November 2016, compared to 29% when the same question was asked this month. Among Republicans, the percentage had grown from 4% to 9%; among Independents, it had grown from 10% to 17%.

These results have important implications for the politics of election hacking and the policy response. Here are two quick thoughts:

That’s enough on the partisanship angle for now. The survey contained a couple of other questions about perceptions of the threat of computer hacking in elections, which I hope to write about in the coming days.

Methodological note. The March 2018 survey referenced in this post was conducted by YouGov as a part of their omnibus survey. The November 2016 Survey of the Performance of American Elections was also conducted by YouGov as a special project. Both surveys were weighted to produce a representative sample of American adults. The questions about computer hacking asked in each survey were identical.