The annual State Certification Testing of Voting Systems National Conference was recently held in Raleigh, North Carolina.  This is one of my favorite annual meetings, because it brings together state and local officials who are responsible for the care and feeding of voting technologies.  I learn a lot every year.

Check out the program, including slides and other documents, here.

The price of attending is that every participant must give a presentation.  This gave me an opportunity this year to pull together work I have done over the past several years about public opinion related to voting technology and election security.  This is the first in a series of blogs in which I share some of the material I presented in Raleigh.

Today’s post is about attitudes toward voting machines.  The current nationwide attention to election security has led to a renewed interest in voting technologies and to two topics in particular:  (1) the use of computers to cast and count ballots and (2) the age of the equipment and the need to replace machines that were bought in the aftermath of the 2000 election.

Beginning in 2012 I started asking respondents to public opinion surveys what they think about different voting technologies.  Not surprisingly, opinions among the public about voting machines have changed in recent years, particularly as the drumbeat against DREs has grown louder, and as the security of voting technologies has become more salient.

To see how opinion has changed in the recent past, it is useful to start in 2012, when I first asked a series of questions about voting machines in the Cooperative Congressional Election Study (CCES).

(The CCES is the largest academic study of political opinions conducted every two years before and after the federal election.  One nice thing about the CCES is that it allows researchers to ask their own questions of a representative sample of adults within the context of a larger survey.)

The responses to the questions I asked revealed that DREs were clearly the technology of choice. in 2012

The bottom line was measured by asking respondents which voting technology they would prefer to vote on.  The technologies were defined as follows:

Especially interesting are attitudes of respondents based on the voting equipment used in their home county.  The table above shows how this breaks down.  Respondents from counties that used DREs preferred them over opscans, 74%-13%.  Surprisingly, respondents from opscan counties also preferred DREs, by a comfortable 50%-30% edge.

Lying behind the overall preference for DREs over opscans — and the strong preference for either of these technologies compared to hand-counted paper — was a belief in the functional superiority of DREs, especially to count ballots and for usability.

To probe these deeper attitudes about voting machines, I asked respondents what they thought about the three major types of voting technologies.  In particular, I asked whether the respondent thought it was easy (1) for dishonest people to steal votes, (2) for disabled voters to use, and (3) for election officials to count votes accurately.

As the table below shows, on the whole, DREs won out over opscans — they were virtually tied on the question of vote-stealing, whereas DREs won hands-down on usability and counting accuracy.  Both opscans and DREs won out over hand-counted paper. 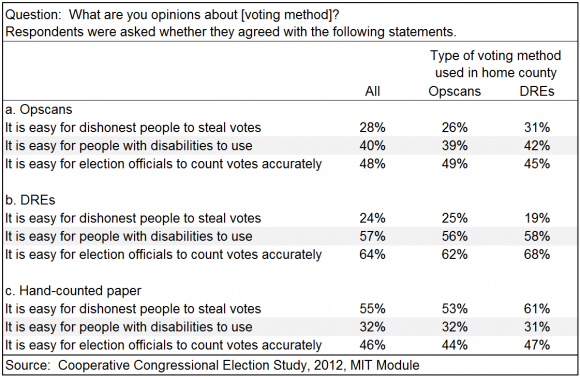 Probably the most interesting results come in analyzing respondents based on the type of voting technology used in their communities.  Here, we find surprisingly little difference between users of opscans and DREs.  For instance, 26% of opscan users thought it was easy to steal votes using opscans, compared to 31% of DRE users.  Most importantly, in 2012, even users of opscans believed that DREs were easier to use by voters with disabilities, and were easier for election officials to count votes accurately.

Opinions have changed since 2012.

In 2016, I had the opportunity to ask the same set of questions in the CCES.  In addition, suspecting that opinions were changing rapidly, I was able to put a couple of questions onto the YouGov Omnibus in the fall of 2017.  Here’s what I’ve found: 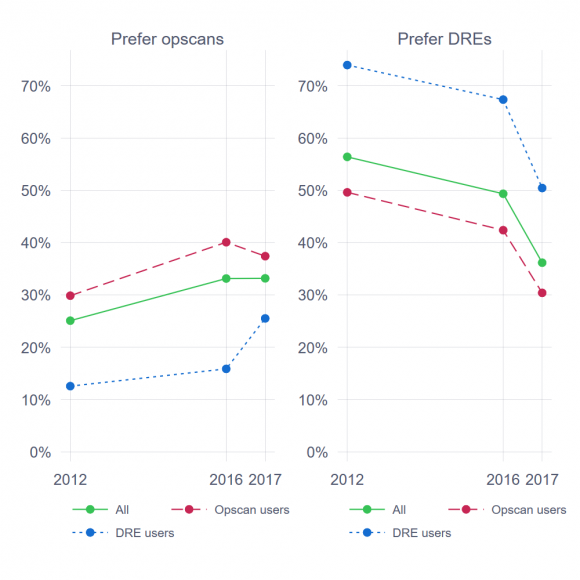 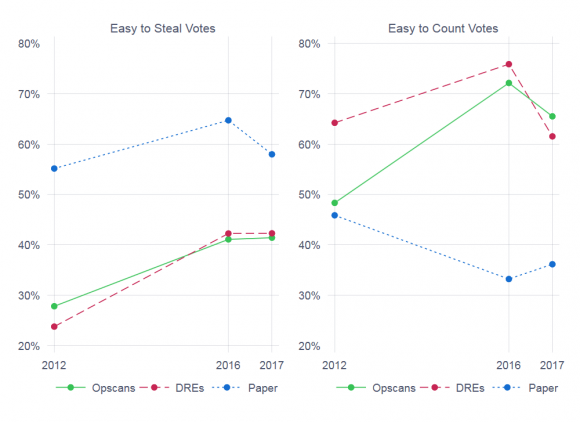 Thus, as criticism of DREs has grown in public discourse, and computer security has become a more salient issue in election administration, the bloom has come off the DRE rose.  This is good news for those who have long advocated that DREs be abandoned for paper.  There is a caution here, however. Although support for DREs has declined significantly over the past five years, DRE users still believe it is the superior technology compared to opscans.  This suggests that as election administrators transition away from DREs over the next several years, they may find themselves needing to deal with local public opinion that may be skeptical of the move, and regard opscans as an inferior technology.