In recent months, Americans have become somewhat more confident that election officials are taking the steps necessary to guard against “computer hacking” in the upcoming election.  At the same time, likely voters have become no more (or less) confident that their votes will be counted as intended this coming November.

These findings are based on answers to questions posed to a representative national sample of 1,000 adults by YouGov last weekend.  The research was supported by a grant from NEO Philanthropy, which bears no responsibility for the results or analysis.  These questions, about computer hacking and overall voter confidence, were identical to ones asked last spring.  The results suggest that despite a fairly steady stream of negative journalistic reports and opinion pieces implying that election officials are unprepared for the November election (like here, here, and here), the public’s overall evaluations have remained steady, and certainly haven’t gotten worse.

A deeper dive into the data show many of the same traces of partisanship that are now common in attitudes about election administration.  For instance, Republicans are more confident about the upcoming election, both from a cybersecurity and general perspective.

Concern about election security was measured by a question that read:

How confident are you that election officials in your county or town will take adequate measures to guard against voting being interfered with this November, due to computer hacking? 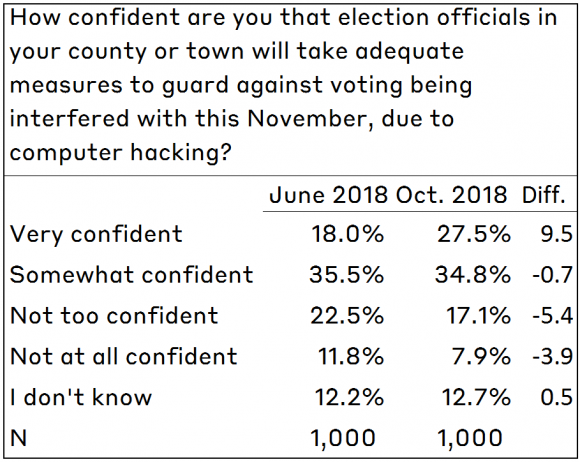 Overall, 27.5% responded “very confident” and 34.8% responded “somewhat confident.”  This compares to answers from last June, when the corresponding figures were 18.0% and 35.5%.

On net, the 9.5-point increase in the “very confident” response came in roughly equal portions from the two “not confident” categories.  Of course, because we don’t have a panel of respondents, just two cross-sections, it’s impossible to know how much individual opinion shifted over the five months.  Still, it is clear that the net opinion shift is in a positive direction.

Who shifted the most?  Only one demographic category really stands out upon closer inspection when we examine the change:  party.  Although confidence in protecting against election hacking rose among all party groups, the rise in the “very confident” response was greater among Republicans than among Democrats.  Independents also became more confident, but they were still more subdued than partisans.

The interesting case of political interest

One demographic had an interesting effect in the cross-section, but not in the time series:  interest in the news.

In both June and in October, respondents who reported that they followed news and public affairs “most of the time” were more confident that election hacking would be fended off at the local level than those who followed the news less often.

For instance, in June, 70.9% of Republican respondents who reported they followed the new and politics “most of the time” were either “very” or “somewhat” confident that local officials were prepared to fend off hacking in the upcoming election.  Republicans not so engaged in political news were less likely to report confidence, at 58.9%.  The comparable percentages for Independents were 54.5% and 35.2%, and for Democrats they were 53.5% and 49.0%.

In October, high-interest respondents of all strips were more confident than they had been in June.  However, neither the high- nor the low-interest groups grew  more confident faster than the other.  That’s what I mean when I write that the effect is “in the cross-section, but not in the time series.”

(One might read the previous table as suggesting that high- and low-information Democrats became more confident at different rates over the past four months.  However, the number of observations is so small in these subgroups that I wouldn’t make such fine distinctions with these data.)

What do I, and the respondents, mean by “computer hacking?”

Before moving on to voter confidence more generally, I want to address one question that I know some people are asking themselves:  What is meant by “computer hacking” in the upcoming election?  In March, I wrote about what election hacking means to voters.  You can read that post here.

Assuming that this differential framing of the issue remains true today, we can imagine that the more sanguine view about computer security in the upcoming election means different things to the two sets of partisans.  It is likely that Republicans are becoming more convinced that state and local election officials have traditional election administration under control for the upcoming election.  Democrats, on the other hand, have most likely become slightly more convinced that election officials will be effective in fending off foreign intrusions.

Let’s see what they think when the election is over.

The slight improvement in confidence about preparations to defend elections against cyber-attacks is in contrast with the lack of change in attitudes about overall voter confidence.

In addition to asking the cyber-preparedness question, I also recently asked respondents my two standard voter confidence questions.  The first, asked of all respondents, was:

How confident are you that votes nationwide will be counted as intended in the 2018 general election?

The second question, asked of respondents who said they planned to vote in November, was:

How confident are you that your vote in the general election will be counted as you intended?

These are commonly asked questions.  Others have asked them recently, such as the NPR/Marist poll in September.  Here, I take advantage of the fact that I regularly ask the question in the same way, using the same method, to see whether there have been any shifts as the election approaches. 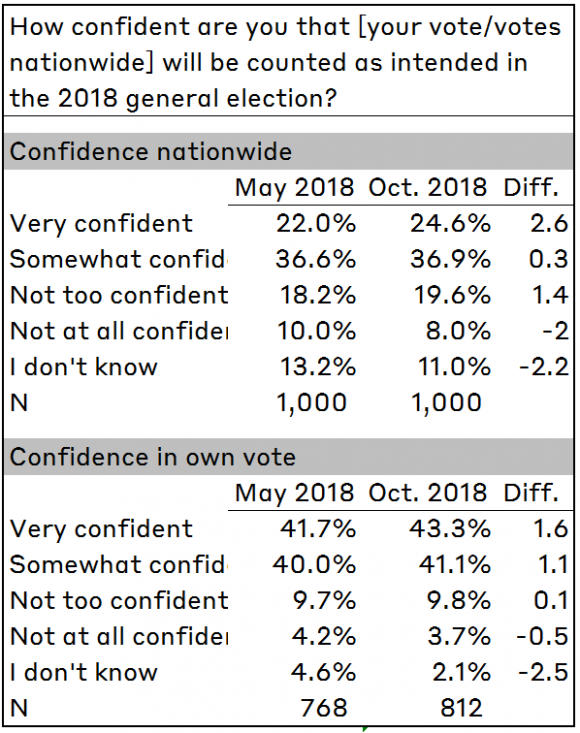 There has been virtually no change in overall responses to either question since May, the last time I asked this question.  In May, 58.6% gave either a “very” or “somewhat” confident answer to the nationwide question, compared to 60.5% in October.  The comparable percentages for confidence in one’s own vote were 81.7% and 84.4%.  The changes across the five months are not large enough to conclude that anything has changed.

Drilling down more deeply into partisanship, we also see few changes that distinguish the parties.  Republicans gave more confident responses to both questions, but both parties’ partisans were virtually unchanged since May.

There is now a considerable literature on the tendency of survey respondents to express confidence in the overall quality of the vote count, either in prospect or in retrospect.  The findings I report here, therefore, are not path-breaking.  They do stand in contrast to attitudes about a newly prominent piece of election administration, computer security.  That piece is new to most Americans, and they are still getting their bearings when it comes to assessing the difference between hyped alarm and serious worry in the field.  It will be interesting to see how all this plays out in the next month, and in the weeks to follow.