Our Monitoring the Election project has released two briefs, reporting on preliminary results from a national survey of registered voters conducted immediately after the November 3, 2020 Presidential Election.

These two briefs provide a glimpse into how the heated rhetoric about election and voter fraud before and during the general election has been received by the American electorate.

One of these briefs focuses on the general question of voter confidence in the election. 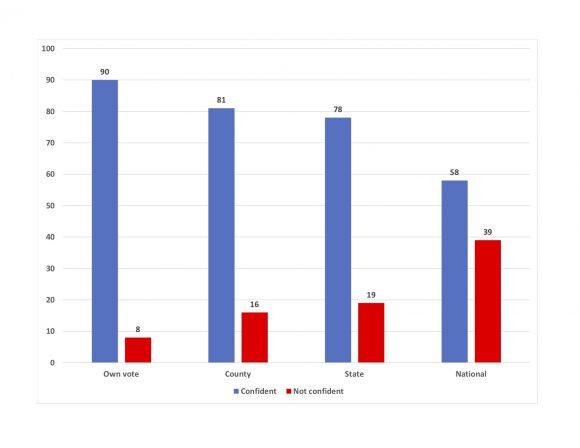 As you can see, 90% of voters were confident that their ballot was counted as they intended, which given the heated rhetoric about this election is a remarkable number. It’s also remarkable that about eight of ten registered voters have confidence that votes were counted as intended in their counties and their states. Those are also remarkable numbers, and in my opinion, a strong indication that American voters are overall quite confident that their local and state election administration was handled well in this contested election.

But when we get to the national level, we find that just over a majority of American registered voters (58%) were confident about the administration of this fall’s election, and that 39% lacked confidence (the remaining registered voters didn’t have an opinion). This lower level of confidence about the national administration of the election is concerning.

Yimeng found that there is a sizable proportion of the American electorate that believes that voter or election frauds like these occur or are common. To quote from the report:

There are many registered voters nationally who said that election or voter fraud
is very common (between 12% and 17% for different types of fraud) or occurs
occasionally (15-17%). Ballot stealing or tempering, fraudulent casting of absentee
ballots intended for another person, and non-citizen voting are perceived to be the
top three types of election or voter fraud. Only about half of the voters believe each
of the six types of fraud occurs infrequently or almost never.

So what does this all mean, in particular for future elections in the United States?

But we see much less confidence in the national administration of the election, where opinions are deeply divided on party lines. We also see that a reasonably large segment of the electorate believes that various types of election or voter fraud occur, and that perceptions about the incidence of election fraud are polarized by partisanship.

This indicates that voters are picking up on elite partisan rhetoric about election and voter fraud, which have been going on since 2016, and which of course has intensified in the past few weeks. But does this mean that despite high levels of voter participation in the 2020 presidential election, will those who lack confidence or are concerned with fraud might be less likely to vote in future federal elections (for example, the 2022 and 2024 elections)? Will the lower levels of confidence in the national administration of federal elections, and concerns about election fraud for some segments of the electorate, lead to further erosion of trust in American democratic institutions?

At this point it’s hard to know what might happen. But these survey results provide some cause for concern, and they show that we need to continue our work to inform the American electorate about the integrity of the 2020 presidential election.

We’ll be posting additional briefs from our survey in coming days and weeks on our website.

Well, I went to the polls this AM to vote –I get a kick out of voting on Election Day, that symbolic moment when we all come together to make a decision; it’s sort of romantic. But, lo and behold, when I gave the poll worker my name there was something odd written next to it on the paper voter rolls –INACTIVE. As a regular voter, even in tiny school board elections, who hasn’t moved and never received a card stating I was at risk of being purged from the polls, I was a bit shocked. Fortunately, I was allowed to vote a regular ballot, though the poll workers did request I fill out a new voter registration form. However, as I filled it out, I realized there was a problem because I wasn’t an inactive voter and I hadn’t moved. So, when the form asked something like, do you agree for us to cancel your voter registration in county x and state x, I realized I didn’t agree, indeed I wanted my status to be reinstated to active not canceled and reentered. Moreover, my understanding of the law is that if I voted from an inactive status I would once again revert to active status. Therefore, given the glitch was clerical and there were no changes to my voter information, the poll workers should have done nothing and let me return to my true state of activity!

The issue of purging voters has been a front burner election topic with our current Secretary of State who is concerned that the voter roles may have people on it who are not regular voters (go here). Amusingly, I join prominent political wives and election reform activists who were determined “inactive” in a recent Secretary of State mailing. Obviously, something is wrong with the process of identifying inactive voters.

This brings up a more important point; keeping voter lists “clean” may have unintended consequences like purging legitimate voters who have a right to vote. We included a question on our NM Election Administration Voter Survey this year that asks voters if they are concerned they might be accidentally purged from the voter file. Let’s just say after my own experience today, I’m a bit more concerned myself and interested in seeing how average voters feel about this issue.