The Commonwealth of Virginia has been on my mind recently as I have been thinking about voter registration list maintenance. (I know, I have a troubled mind.) Virginia has a very thorough and well-documented “list hygiene” program — which results in an annual report that anyone interested in the topic should read. (Here’s a link to the past four reports.)

Edgargo Cortes, who is the Commissioner of the Virginia Department of Elections, graciously invited me to share the podium with him today, as he led a training session on list maintenance at the annual Virginia Elections Conference.  Edgardo’s remarks were centered around explaining the following chart, which illustrates the various data sets that come together on the regular basis — ranging from yearly to monthly — as his team tries to ensure that eligible voters, and only eligible voters, are on the Commonwealth’s voting rolls. (Click on the graphic for a slightly larger view.) 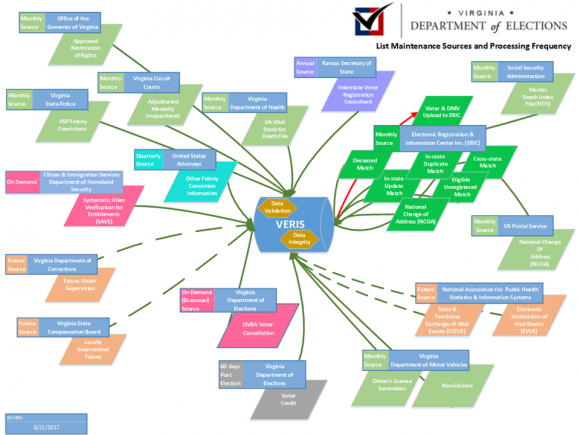 Here are some thoughts that initially occurred to me as I listened to Edgardo talk, and as I’ve spent the day talking with him and his staff:

Virginia is a state that takes the accuracy of its voting rolls very seriously.  Check out their reports — or at least study the chart.