Pre-election worries about the conduct of the 2018 election centered on the threats of cyber-attacks on election systems from abroad and hacking of voting machines from, well, everywhere.  Although the election produced the usual supply of stories that raised concerns about election administration overall, there was no verified successful attack on computerized election equipment this year.  The question this raises is whether this news percolated down to the general public.

Based on public opinion research I conducted after the election, it seems that it did.

Not surprisingly, both before and after the election, attitudes about election cyber-preparation were structured along partisan lines. Republicans were more confident than Democrats in June (66% vs. 51%), October (80% vs. 60%), and November (79% vs. 71%).

What is probably more interesting is that attitudes about cyber-preparation also varied by respondent education and attention to the news.   As we will see, the pattern of responses by education was especially interesting.

The data in this post were taken from three surveys I conducted during June 7-11 and October 5-7, before the election, and during November 7-9, after the election.  In each case, I interviewed 1,000 adults as a part of the YouGov Omnibus survey.  The research was supported by a grant from NEO Philanthropy, which bears no responsibility for the results or analysis. 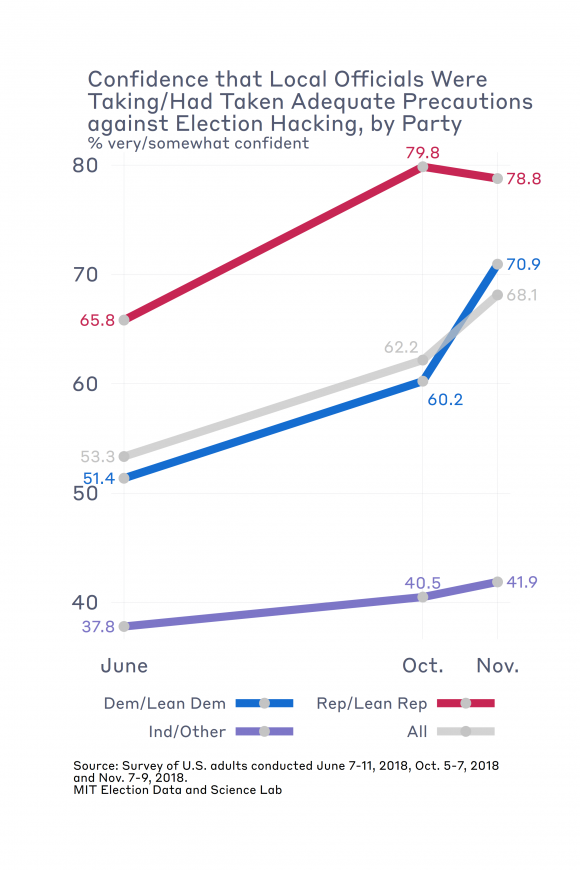 Unsurprisingly, attitudes about election administration have become structured around partisanship for many years.  In the case of attitudes about cyber preparations, in June Republicans were 14 points more likely to agree that local officials were taking adequate precautions against computer hacking in the upcoming election.  By October, that gap had opened up a bit to 17 points, although both Democrats and Republicans had become more confident across those four months.

Experience from the election did not change how Republicans viewed cyber preparations, but it did alter the views of Democrats quite a bit.  Republicans were still more sanguine, but the gap between Democratic and Republican attitudes had been cut in half.

Respondents who were neither Democrats nor Republicans — which includes both “pure” independents (about 17% of respondents) and minor-party identifiers (6%) were much, much less likely to express confidence in preparations about computer hacking across all three surveys.  They were also immune to changing opinions across the five months.

Interest in the news 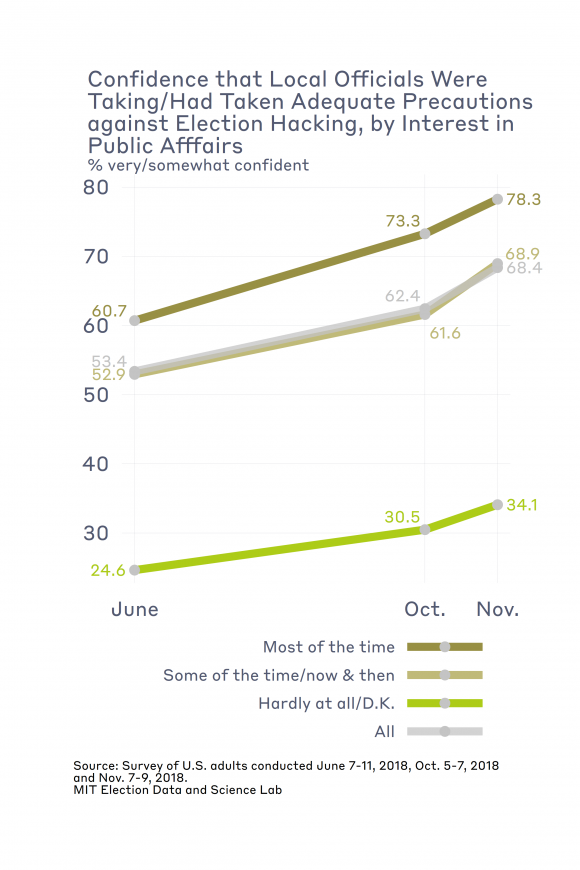 The fact that partisans of all stripes became more confident in the preparations of local election officials to handle computer security suggests there were other factors that led Americans to change their attitudes about cyber preparations. What might these be?  A couple come immediately to mind.  The first is attention to the news.  The second is education.

In addition, respondents at all level of attention to public affairs increased their confidence in the adequacy of computer-hacking preparations over the three surveys.

The fact that high-information respondents — political junkies — have consistently expressed the greatest confidence in the adequacy of the response to potential election cyber attacks is interesting, considering the amount of negative press that election officials received before the election about their security preparations for the 2018 election.  This finding suggests that the negative tone of many of these articles did not sink into the consciousness of all readers.  Or, it could suggest that high-information respondents already are more likely to trust election officials as a general matter any way. 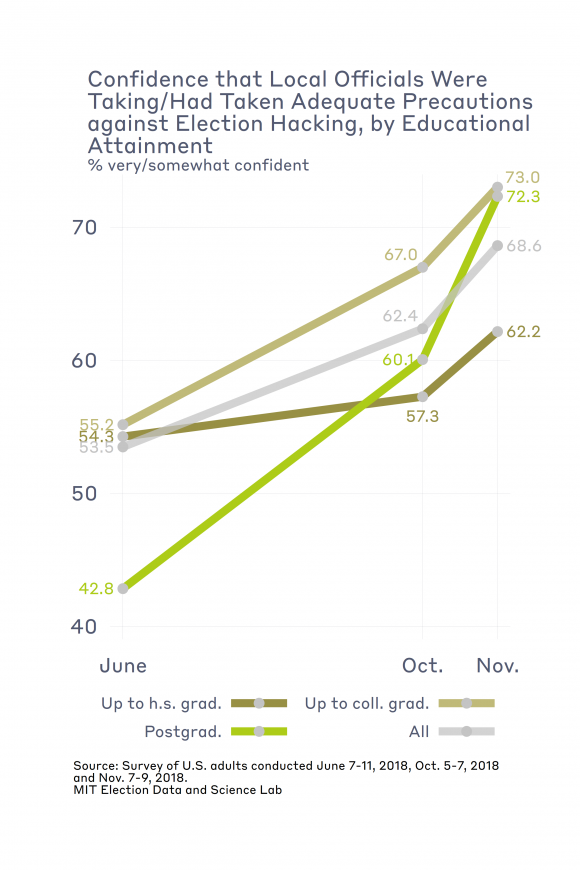 The correlations between educational attainment and attitudes about cyber preparations are probably the most interesting in the surveys.  All educational groups became more confident over time in the degree of preparations to counter hacking the election.  However, one group stands out in how this correlation changed — those with postgraduate degrees.

Back in June, when the question about cyber preparation was first asked, respondents with postgraduate degrees were by far the most skeptical.  Only 43% of postgraduates had confidence in the level of preparation, compared to 54% of all other respondents.

As summer turned to fall, all groups, with the possible exception of those with no more than a high school education, became more confident, but the biggest movement came from those with postgraduate degrees.  Finally, in the month that bracketed the election, all educational group became more confident, but the increase in confidence among postgraduate degree-holders is especially striking.

Finally, one of the major topics in the election security realm was the fact that about 20% of voters, including all in-person voters in five states, continued to cast ballots on paperless voting machines (direct-recording electronic machines, or DREs).  The past couple of years have seen a relentless attack on these machines by reform groups and expert bodies (including one I served on), and so it would be natural to see if voters from states with a high degree of DRE usage had a lower opinion about hacking preparations at the state and local level.

The number of voters in the surveys from the DRE states is relatively small (only about 90), so I would not bet too much on this analysis.  However, as I have written before, (see this link, for instance) up until recently, voters in all-DRE states have been quite confident in the voting machines they use.  The fact that respondents in these states may have been less confident in overall computer hacking preparations during the summer may be further evidence in the gradual erosion of confidence in these machines, where they are being used.  Still, we don’t see evidence here of those voters being more worried about whether their states are adequately pushing back against the dangers of hacking elections.

Computer security is a new topic in the area of election administration for most of the public.  It is unsurprising, therefore, that attitudes are fluid.  Like other election-administration attitudes, they are amenable to being viewed through a partisan lens.  But, because the issue is so new, attitudes about hacking are also amenable to being changed by unfolding events.  No verifiable computer attacks on voting machines were reported in 2018, and some of the public picked up on it.  Whether this positive state of affairs remains unchanged is, of course, subject to the unfolding of history.  It will be interesting to see what happens, as we move into the 2020 election season, and the outcome of the election (and thus the threat environment) moves to a different level.