The Healthy Elections Project has been running a series of surveys in a half dozen battleground states, asking how voters intend to cast their ballots.  I have previously published thoughts on Arizona, Florida, North Carolina and Wisconsin, with a bonus posting about Georgia (where we are not surveying, ourselves.)  This brief note focuses on Pennsylvania

First, as to the intentions themselves.  The table below shows that there was very little movement in reported intentions across the four waves of the surveys.  An ANOVA test fails to reject the null hypothesis that the four waves are drawn from separate samples, so I proceed using results from the pooled survey, discarding the “don’t knows.”

Second, to convert these expectations to raw numbers, we need an estimate of turnout. In most of the other memos, I used a couple of ad hoc methods.  Since then, I have come across the state-level turnout estimates that are produced as a byproduct of the FiveThirtyEight presidential election forecasting model, and so I’ll use those instead.  For Pennsylvania, the low and high estimates are 6.0 million and 7.7 million, respectively, which is what I’ll use here.  However, turnout in 2016 was 6.2 million, and thus I’m certain that the low estimate is too low.

Third, here is what the combination of numbers above imply for the final distribution of votes in Pennsylvania, by mode:

Fourth, a final calculation needs to be made, if we want to estimate the number of mail ballots that will be requested, since not all mail ballots are returned.  For the states that make their absentee ballot files available, it appears that in 2016, around 85% of requested mail ballots were returned.  If that return rate holds for Pennsylvania, then it should expect between 2.9 million and 3.7 million requested ballots.

There is one data issue that needs to be brought up here.  Pennsylvania does not have a full-bore early voting program.  Rather, it allows in-person mail voting, which some cities, notably Philadelphia, have promoted.  The Pennsylvania voter file does not have a separate code for in-person absentee ballots, and the conventional way to figure out who was voting in person yielded an implausible number of early in-person voters.  (The standard way is to select records in which the request for the ballot, its issuance, and return all share the same date.)  Therefore, I am assuming that the absentee ballot file does not record in-person absentee voters, although I could be wrong about that.

As of yesterday, 3,058,367 ballots had been requested and 1,850,393 returned a mail ballot.  Today was the deadline for requesting mail ballots, which means that the number of mail ballots requested will likely hit the low end of the estimates, at around 3.1 million.  For the past week, Pennsylvania has been averaging 95,000 returned ballots each day.  Leaving aside the ballots that will arrive after Election Day, if the state keeps receiving ballots at last week’s page, it will eventually have 2.5 million mail ballots, which is also on the low side of the estimates. 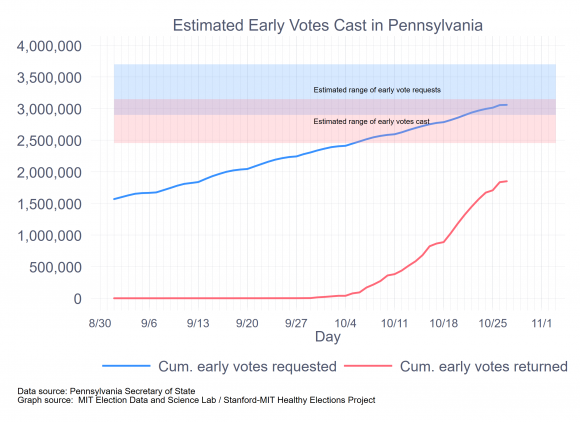 As for Election Day, this is where the turnout estimate really matters.  If we think that 2.5 million mail ballots (and a small number of early votes) will come in before Election Day, then if turnout is at the low end of 6.0 million, that leaves 3.5 million to vote on Election Day.  If turnout is at the upper range of 7.7 million, then Election Day turnout would have to be 5.2 million.  This is a considerable range.  My own hunch is that turnout will hit the upper range, so Pennsylvania’s election officials would be well served by planning for this larger number. Whether this is necessary, or an over-reaction, will only be known on Election Day.

My fellow VTP Co-director, Charles Stewart III and some of his research team, released an important study last week: “The 2018 Voting Experience: Polling Place Lines.” Charles and his team continue to find that long lines can be an issue in many states and election jurisdictions. They estimated that in 2018, 5.7% of those who tried to vote on Election Day waited more than 30 minutes to vote, and that this was significantly longer than what they had found in the previous federal midterm election in 2014. Importantly, they also show that wait times are not distributed uniformly across the electorate, with nonwhite and voters in densely populated areas waiting longer to vote than whites and voters in less densely populated areas. Finally, as they note that wait times are strongly correlated with a voter’s overall experience at the polls, long wait times are an issue that needs continued attention in the United States. This is especially true as we are heading into what may be a very closely contested array of state and federal primary and general elections in 2020, where many states and jurisdictions may see much higher turnout than in 2016 and 2018.

The Presidential Commission on Election Administration’s report is getting a lot of attention and praise following its release on Wednesday. One aspect of the report I want to highlight is the degree to which the Commission aimed to ground their findings in the best available research, academic and otherwise.  It renews my faith that it may be possible to build a field of election administration that is more technocratic than it currently is.

The report’s appendix, available through the supportthevoter.gov web site, is a valuable resource on the available research about each aspect of the commission’s charge.

I want to lift up an important subset of that appendix, which is a collection of white papers written by a collection of scholars, drawn from a variety of fields and perspectives, that summarized the large literatures that were relevant to the commission’s work.  A collection of those papers has been assembled in one place, on the VTP web site, so that others might have easy access to them.  Here are the authors and subjects:

Much of this research effort was assisted by the Democracy Fund, though of course, the research is all the work and opinions of the authors. Speaking personally, I greatly appreciate the support and encouragement of the Fund through these past few months.

See this recent posting by Dan Smith on early voting in Florida:

Apologies to our regular readers for my absence for a few weeks.  I’m back to update you on all things early voting.

Some of you may have seen an editorial in Roll Call that Rob Richie and I authored, arguing for ranked choice voting in presidential primaries for overseas absentee ballots.  If anyone has reactions, I’d love to hear them. I think this is a great idea, and I’m pondering whether I should work with Rich to push this more systematically in a few states for 2016.

Voting reform is pushing ahead in Connecticut.  It looks like online voting registration–an initiative of the Pew Center on the States--will be put in place.  The legislature may also relax no-excuse absentee voting requirements.  This means my standing comment in powerpoint presentations about the Northeast may need to be amended!

Early voting rates in Ohio seem to be lagging behind 2008. Some local officials speculate that it may because of a fear that candidates will drop out, but I don’t find that particularly convincing.  None of the leading four candidates is showing any signs of withdrawing at this point.  As Mike Alvarez has argued in his book, it is probably because voters remain uncertain and candidate support is fluid in the Buckeye State.

Another Ohio controversy is brewing over changes to the period for early voting.

Doug Chapin has a blog as part of the Program for Excellence in Election Administration.  Given Doug’s knowledge of the field, I think this has to be an addition to the daily RSS feed.

In a recent posting, Chapin blogged about the challenging 2012 presidential primary calendar, and how constant shifting deadlines (and rosters of candidates) create administrative and budgetary challenges for administrators.

I’ll add a little spice to the mix: early voting makes the question of “when exactly is election day again” even more complicated.  With the Federal Voting Assistance Program taking a muscular role in making sure that the MOVE Act is  being fully implemented, Bob Carey is sure to pay close attention to presidential primary ballots.

“Election Day” starts 45 days before the first announced primary.  If, as is being proposed, Florida moves its primary to January 31st, then the first presidential primary ballots will be mailed out on December 17th, and obviously prepared earlier than that.

The number of UOCAVA voters in NH is tiny–4221 in the 2008 EAVS.  But Florida reported 121,395 UOCAVA ballots transmitted in 2008 (largest in the nation).  When *exactly* is Election Day, again, Doug asks?  I have an answer: right around January 1st, 2012, when the first UOCAVA ballots are likely to start to arrive.

Like alcohol during prohibition, it turns out that many Ohio voters actually liked many of the elections procedures recently banned by the state legislature.

The point is well-taken; the Ohio Legislature eliminated times and places for voting that we taken advantage of by 234,000 citizens in Franklin County alone.  Like the changes being made in a number of other states, including Florida, Texas, and Georgia, legislators argue that these changes will save money.  The fiscal impact note accompanying the bill, however, provides only slim evidence:

This provision shortens the amount of time for in-person absentee voting, which could reduce some costs for county boards of elections for operating these absent voter locations. END_OF_DOCUMENT_TOKEN_TO_BE_REPLACED

Changes to early voting are on the administrative and legislative calendar in many states and jurisdictions.  A brief update from the mail bag:

This story in the Post is not a surprise to anyone who follows early voting.

All I can say to the Fenty and Gray forces is that early voting, in as much as we can generalize from other races in other states and localities, is more likely to reshuffle the electorate than change the electorate.

The fact that early voting is higher in Fenty strongholds may mean that Fenty has a better funded, better organized get out the vote operation.  But it may also mean that areas where Fenty has more support are areas with voters who are, on average, whiter, better educated, and have higher incomes.

One important difference, however, is that this is a local race, and we have little empirical data on the turnout effects of early voting in local races.  Many of us–me included–believe the impact is much greater in this contests.  In addition, this is a relatively “high profile” contest, which will should only increase the turnout impact of early voting.

The reports of confrontations at the early voting stations is a cause for concern.  I wonder what election day will bring.  The next week should be interesting.  Hope my friends Alysoun and Rokey at the DC office are hanging on.  It will be a busy week.

I spent the end of last week in Bellingham, WA (a wonderful city by the way–but keep it a secret!) and experienced the impact of a “slow count” firsthand.  At least in Washington, the vote totals are updated daily, and for the press, this seems to provide an ongoing source of breathless coverage, as pundits (my friend Todd Donovan, a professor at Western Washington among them) speculate about the remaining ballots.

But much of our conversation as the week went on centered on the Australian election.

Nearly a week after polling day, as many as two million “special” ballots remain uncounted in the Australian federal election, and the balance of party control remains in question. While the parties continue to maneuver over potential governing coalitions, 14% of ballots cast have yet to be counted.

How did Australia get into this situation? END_OF_DOCUMENT_TOKEN_TO_BE_REPLACED